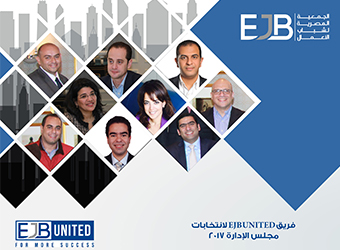 An alliance of major investors as well as media and political figures is competing on May 2nd to win the Egyptian Junior Business Association’s (EJB) 2017 board member elections.

Under the rubric ‘EJB United’, the nine-member alliance provides a platform that focuses on assuring the association’s more effective participation in the state reform policies by organising regular meetings with the decision-makers in the country.

The platform also calls for stronger presence for the EJB across the country by inaugurating new branches to ensure a successful involvement in the state reforms as well as launching new initiatives for youth employment, combat of corruption, and support of women rights.

Below are the names participating in the alliance with brief biographies.

Mounir Gazayerli, Marketing Director at Unilever Mashreq and EJB’s Vice Chairman, is among the participants in the EJB United alliance. Gazayerli first joined Unilever in 2000 as Assistant Country Manager in Sudan then he became Senior Brand Manager for five years, until he was appointed as Marketing Manager in November 2009.

Ahmed Osman, Chief Executive Officer of Chrome, is participating in the EJB United alliance. Osman was Country Manager of Projacs International between 2009 and 2015. He also serves as President – Middle East Council for Small Business and Entrepreneurship (MCSBE) since 2014.

May El Batran, Head of the Egyptian Parliament’s Information and Communications Technology Committee (ICT), is the 9th member in the EJB United alliance. El Batran is also the founder and manager of TMA Development, Training and Consulting.

The Egyptian Junior Business Association (EJB) is a non-governmental organisation that was founded in 1999 by a group of young business executives and entrepreneurs to be one of Egypt’s premium and most influential business associations.

EJB has branches in Cairo, Alexandria, Delta, Port Said, South Sinai, and Upper Egypt along with 16 committees. It contains a network of more than 450 prominent members of senior and highly successful businessmen and women between the ages 21 to 45, representing various sectors and more than 180,000 employees.

EJB works as a channel for SMEs owners with the government to improve the business environment, through tackling the major obstacles hindering the economy, and recommend solutions from the business sector perspective and communicate the outcomes to concerned entities, according to the association’s website.

It also acts as a networking hub for forming new business partnerships.