International News
By Administrator On Jun 15, 2013 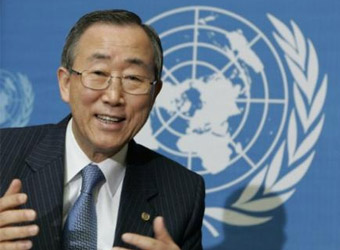 When the heads of the World Bank and the United Nations flew into the violence-wracked African city of Goma on a cloudy day last month, it was the first time the giants of international development had joined forces in the struggle to help the world’s most fragile regions.

World Bank President Jim Yong Kim and U.N. Secretary-General Ban Ki-Moon traveled to three countries in the Great Lakes region in East Africa to cement a new partnership, tying $1 billion in bank money to the U.N. peacekeeping efforts in the region. They announced the funding in Kinshasa, the capital of the Democratic Republic of Congo (DRC), even as mortar shells were falling in the country’s eastern edge in Goma. But the men, both born in South Korea, pledged to continue their trip.

“We’re going there because our belief is that peace, security and economic development are intertwined,” Kim said in Kinshasa. “We’re going with a very specific purpose in mind: there must be a peace dividend.” The organizations admit the effort to work together faces hurdles. Both have vast, unwieldy bureaucracies that have historically competed with each other, and the bank had been wary of loaning to fragile states with shaky governments and murky institutions.

Further, development analysts warn that no one has yet figured out a surefire way to bring lasting development to countries caught in cycles of violence.But with half the world’s poorest people set to live in conflict-torn regions by 2018, the institutions can ill afford to do nothing, the World Bank and analysts say.

The organizations have already cooperated in some countries including Liberia and Bosnia. They even signed a framework agreement in 2008, vowing to work together in nations experiencing crises or just emerging from them. But other efforts have fizzled, or been limited to one-off attempts in specific countries or situations, analysts say.

“There wasn’t any kind of systematic, organizational way for the two institutions to work together,” said Steven Radelet, a professor at Georgetown University. “Sometimes it has worked well, and sometimes there have been big gaps.” The United Nations and World Bank often have similar goals. But their approaches diverge and they use different vocabularies, with the bank focused on economics and the United Nations steeped in notions of security and human development. Even on the trip to the Great Lakes, logistics officers grew frustrated trying to familiarize themselves with each other’s protocols. Competition over who gets credit for programs also has stymied efforts at cooperation.

Aid agencies tend to jump in to help countries, duplicating efforts and complicating matters for governments that have limited capacity to deal with so many organizations, said Laurence Chandy, a fellow at the Brookings Institution think tank. “There’s a subtle but massive distinction … between coordinating and cooperating,” he said. “The truth is, we really struggle even to coordinate.

The joint mission to Africa, which included visits to the DRC, Rwanda and Uganda, was meant to signal from the top that this time would be different, Kim said. “There’s this African saying, ‘When the elephant fights, the grass suffers,'” he said in an interview in Entebbe, Uganda. “I’ve been the grass for most of my life, watching these powerful organizations fight each other on the ground.”

Kim has spent most of his career in public health, unlike the diplomats and bankers who preceded him as head of the bank. His work at the World Health Organization, a U.N. agency, gave him an insider’s view of the United Nations’ strengths and foibles, said Raymond Offenheiser, president of Oxfam America, a development group. The idea behind the Great Lakes campaign is that development cannot exist without security, and security cannot last without giving people incentives to keep the peace, which development projects can offer.

On his trip to the region, Kim announced $1 billion in new funds for infrastructure projects, cross-border trade, and health and education services. It will be contingent on all countries in the region abiding by a U.N.-brokered peace deal from late February.Researchers like Chris Blattman at Columbia University say there is evidence that large infrastructure projects like roads and power plants – a strength of the bank – can help stabilize a country and boost the economy. But combating poverty in fragile states has been notoriously difficult. Those countries lag behind the rest of the world in standard measures of health, education and infant mortality, and are vulnerable to relapse when conflict returns.

Dealing with security is also a new thing for the World Bank, which in the past largely avoided fragile states. “I’m not doing this just because I want to be the Kumbaya guy,” Kim said, in reference to working with the United Nations. “I’m doing this because if we are to have any hope of ending poverty and boosting shared prosperity, there’s just no question we have to work with everybody.” “To me, not to work with the U.N. means that you’re admitting up front that you’re going to have low aspirations.”

As he approaches his one-year anniversary at the helm of the bank, Kim has made collaboration with development organizations, including the United Nations, a top priority. Kim and Ban have talked about doing another joint trip, this time to Africa’s Sahel. Several factors have driven the bank’s shift in focus to countries in turmoil.

First, of the 82 countries qualifying for loans and grants from the bank’s fund for the poorest nations, 31 are classified as fragile states. The bank now proposes that about 20 percent of such funds go to those states, up from 8 percent in the late 1990s. The nature of fragility has also changed. The number of conflicts around the world is falling, but they now tend to last longer, blurring the distinction between humanitarian aid that rushes in when a crisis erupts, and long-term development.

Finally, the realities of population growth mean that half of the world’s poorest people will live in conflict-torn regions by 2018, and more than two-thirds by 2030, according to a Brookings Institution analysis. That suggests the World Bank cannot achieve its goal of eliminating extreme poverty by 2030 without focusing on conflict areas.

The DRC, where violence has repeatedly displaced people and hampered programs, could prove to be a particularly tough test case. More than 70 percent of its 67 million people live below the poverty line, despite billions of dollars in development aid over the past decade. “It’s easy to write off the chances in these sorts of situations. But it’s really about what the alternative is,” Chandy said. “If the bank isn’t going to be there, who is?”