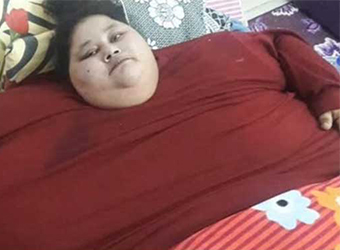 An Egyptian national deemed to be the world’s heaviest woman has lost around needed 40 kilogrammes, from a needed 200 kilogrammes, since her admission to an Indian hospital where she is scheduled for a life saving weight loss surgery, the Indian daily The Asian Age reported on Monday citing hospital sources.

The 36-year-old woman Eman Ahmed Abdel Ati, who weighs around 500 kgs, was flown to India on 11 February to treat her life threatening case, which has attracted public attention and empathy worldwide since the story broke.

The Alexandrian woman, whose trip to India’s Mumbai was the first she has made out of her first floor flat in 25 years, has to lose a further 200 kilograms before doctors can operate.

According to doctors at the hospital where Eman was receiving care and treatment, she is now able to move her limbs and hands following the latest one-week weight loss, while maintaining a cheerful and positive mood after many difficult years.

According to sources at the hospital, the mandatory weight loss has made Eman optimistic about the future of her case.

“She has shown a drastic improvement after losing around 35-40 kg of weight after her admission here. She is responding well to the treatment. She has started moving her hand and limbs, which are good signs,” the hospital’s endocrinologist Shehla Shaikh said.

Eman is scheduled for bariatric surgery, which will be scheduled after results of her gene study come out in the next four weeks.

Bariatric surgery, also known as weight loss surgery, includes a variety of surgical procedures, such as the size of her stomach being reduced through a gastric band or through a gastric bypass surgery where the digestive system is resected and re-routed past most of the stomach.

According to the Indian English-speaking a daily, a team of 13 doctors are working on Eman’s case.

Suffering from morbid obesity since her childhood, Eman first appealed for help in October 2016 to Egypt’s President Abdel Fattah al-Sisi, asking him to save her life.

Her sister then shortly got in touch with renowned physician Muffazal Lakdawala, where he then began fund raising to bring Eman to India due to the family’s financial condition.

She was first rejected a visa by the Indian Embassy in Cairo, however, after the weight loss surgeon tweeted to India’s foreign minister, they quickly rushed to help.