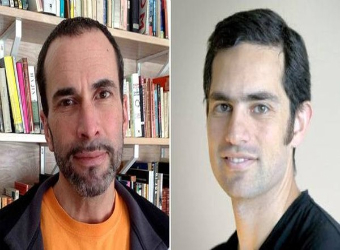 Two Canadians on a hunger strike in an Egyptian prison said Saturday they were beaten and have been subjected to degrading treatment since being detained at the height of violent protests in Cairo last month.

Tarek Loubani and John Greyson issued a statement saying they have been held in prison since Aug. 16 with no access to phone calls. The say they are sharing a tiny cell with 36 other political prisoners and sleeping on concrete and that there are cockroaches in the cell.

The statement was dictated to their lawyers and published on their friend Justin Podur’s website, which is dedicated to their release. The two men have not been charged.

Loubani, a physician, and Greyson, a filmmaker, were trying to make their way to Gaza where Loubani was to teach emergency room medicine and Greyson was considering producing a documentary.

The pair said they went to watch the protests a few blocks from their hotel on Aug. 15 and witnessed dozens of protesters being brutally killed.

The pair had only planned an overnight stay in Cairo on Aug. 15 before heading to Gaza but they couldn’t get across the border due to the outbreak of protests in Cairo and across the country the following day.

The two men are on day 12 of a hunger strike to protest their detention. Greyson’s sister Cecilia said Canadian consular officials visited the men two days ago and told her they are in “good health” but are tired and showing visible signs of weight loss.

Foreign Minister John Baird said he raised their case in a meeting Friday night with his Egyptian counterpart.