International News
By Administrator On Mar 3, 2012 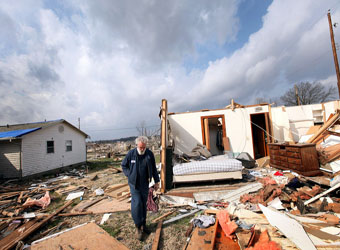 Dozens of tornadoes cut a path across five states in the U.S. Midwest and South yesterday, smashing houses and damaging schools. At least 27 people were killed, the Associated Press reported.

Fourteen people died in Indiana, 12 in Kentucky and one in Ohio, AP reported, citing state authorities.

At least 44 tornadoes were reported in five states, according to the U.S. Storm Prediction Center in Norman, Oklahoma. Watches were in effect in nine states, meaning the storms had a good chance of forming. Weather service radar was tracking potential cyclones in Indiana, Kentucky, Alabama, Tennessee and Ohio.

“There is a lot of extensive damage from Borden, Indiana, in the western part of the county all the way to the eastern part,” Adams said by telephone yesterday. “The hardest hit was Henryville, about 19 miles north of the Ohio River.”

The Dubai’s World island project is not going ahead