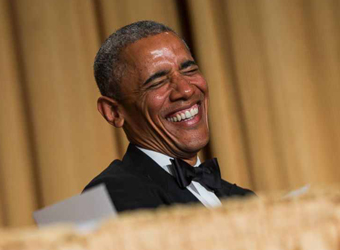 The “bromance” that President Barack Obama has developed with Vice President Joe Biden has inspired millions of Americans, as well as countless memes.

But it’s more than mutual fondness that has kept the two men collaborating successfully for so many years.

When the President surprised the Vice President with the Medal of Freedom Thursday, the two revealed some of the reasons why they have functioned so well as a team.

Here are five secrets to Obama and Biden’s success, which are also the kind of leadership strategies that could help your company run more smoothly. All of the quotes from Obama and Biden below are from their comments at the Medal of Freedom ceremony.

They value honesty, even when it’s hard

Obama and Biden tell each other what they think

“Behind the scenes, Joe’s candid, honest counsel has made me a better President and a better Commander-in-Chief,” said Obama. “From the Situation Room to our weekly lunches, to our huddles after everybody else has cleared out of the room, he’s been unafraid to give it to me straight, even if we disagree — in fact, especially if we disagree. And all of this makes him, I believe, the finest Vice President we have ever seen.”

The conversations haven’t always been easy.

“We’ve disagreed, and we’ve argued, and we’ve raised our voices,” said Biden. “We made a deal we’d be completely open, like brothers with one another.”

They insist on authenticity

Obama and Biden bring their full selves to work, and it helps them connect.

“Folks don’t just feel like they know Joe the politician, they feel like they know the person: What makes him laugh, what he believes, what he cares about, and where he came from,” said Obama. “Pretty much every time he speaks, he treats us to some wisdom from the nuns who taught him in grade school or from an old Senate colleague.”

“About six months in, the President looks at me, he said, you know, Joe, you know what surprised me? How we’ve become such good friends. And I said, surprised you?” said Biden, laughing.

When the people in charge of an operation get along and trust one another, employees often feel more confident that their company is being well-run. They also may be more likely to enjoy their work experience.

They give each other space

Obama and Biden respect each other enough to not micro-manage. Each lets the other work to his strengths.

“Mr. President, you have more than kept your commitment to me by saying that you wanted me to help govern,” said Biden. “Other people don’t hear it that often, but when someone would say, ‘Can you get Joe to do such and such?’ He says, ‘I don’t do his schedule. He doesn’t do mine.'”

“Every single thing you’ve asked me to do, Mr. President, you have trusted me to do. That’s a remarkable thing. I don’t think according to the Presidential, Vice Presidential scholars that kind of relationship has existed. I mean, for real,” said Biden.

They present a united front

While Obama and Biden argue behind closed doors, when they go out of the Oval Office, they are in sync.

“They know when I speak, I speak for you,” said Biden, referring to audiences around the world. “And it’s been easy, Mr. President.”

They know who’s in charge

Part of what allows Obama and Biden to work well together is that, when the arguments and discussions come to an end, they both know who will make the final call.

“Mr. President, you know that with good reason there is no power in the Vice Presidency,” said Biden.

Trump may do away with Russia sanctions if Moscow helpful