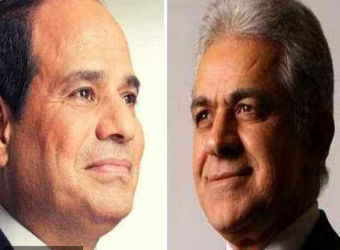 The window for registration in Egypt’s upcoming presidential polls will close at 2pm on Sunday.  A preliminary list of candidates will be announced on Monday, together with the number of endorsements each candidate has collected. Under Egypt’s new constitution, each candidate must secure at least 25,000 endorsements, with at least 1,000 from different governorates.

Egypt’s presidential polls, the first to be held after the ouster of Islamist president Mohamed Morsi last July, are scheduled to take place on 26-27 May.

As the deadline for registration approaches, the only candidates to have so far submitted their presidential bids are former defence minister Abdel-Fattah El-Sisi and leading Nasserist figure Hamdeen Sabahi.

Other public figures such as the flamboyant lawyer Mortada Mansour and national television broadcaster Bothaina Kamel – both of whom had earlier announced they would register – have failed to meet the registration’s requirements. Mansour, the newly-elected chairman of Zamalek sports club, said on Saturday that he had decided to withdraw and that he would instead support El-Sisi’s campaign. As for Kamel, it was clear that she had not been able to collect the required number of endorsements.

Abdel-Aziz Ashri, chairman of the justice minister’s technical office, said that around 600,000 endorsements have been registered across 27 governorates since the door for registration was first opened on 31 March.

On Saturday, Sabahi’s campaign said it had been able to gather notarised recommendation forms from 31,000 citizens across 17 Egyptian governorates – 6,000 more than the 25,000 forms hopeful candidates are required to collect.

Officials in El-Sisi’s campaign fielded a presidential bid on 14 April, with lawyer Mohamed Bahaa Abou Shuqqa announcing that although they had been able to collect more than 400,000 endorsements, they have decided to submit only 200,000 drawn from 27 governorates.

The Presidential Election Commission (PEC) – the five-member judicial body tasked with supervising Egypt’s upcoming presidential polls – is scheduled to meet on Monday to announce the end of the election’s first stage.

From 21 April until 1 May, PEC is scheduled to finalise other election procedures such as revising endorsements and ruling on petitions that can be filed against either candidate. PEC is also scheduled to announce a final list of candidates on 2 May and give the green light for election campaigns to kick off between 3 and 23 May.

As the battle lines of the polls are drawn, El-Sisi and Sabahi have begun unveiling parts of their electoral platforms. Abdallah El-Moghazi, a spokesman for El-Sisi’s campaign, said that El-Sisi himself will announce his electoral programme.

“Once the election campaign officially kicks off on 3 May,” El-Moghazi said, “El-Sisi himself will address the nation on his vision and platform for the future.”

El-Sisi, whose campaign headquarters is located in east Cairo’s upper-class Al-Tagammu district, has had meetings with several sectors of society in recent weeks to express his personal views about Egypt’s political and economic problems.

Addressing a delegation of youth movements on 18 April, El-Sisi said it was high time for all Egyptians to join forces to build a better future for their country.

“As Egypt has really lagged behind the world in recent years, it has become clear that old and traditional means will never be enough or adequate to solve the country’s problems,” he said.

El-Sisi also said that he eagerly wants to see tight security all over Egypt.

“Restoring security and stability should be a priority in order for the economy to recover and in order for every citizen to feel safe,” he said. He estimated that Egypt is in pressing need of LE3 to 4 trillion per year to achieve significant economic growth.

In political terms, El-Sisi told another delegation that “regardless of who will be the next president of Egypt, nobody can ever dare to bring the country back to the pre-25 January revolution’s despotic practices.”

Sabahi’s campaign announced on Saturday that it would mount a tough election campaign against El-Sisi. Sabahi argued that “the fact that El-Sisi swept the endorsements does not send an early signal that he will win the presidential election.”

“Success in the presidential election battle depends on several other factors,” he said.

According to Al-Ahram political analyst Emad Gad, “while most of the country’s more traditional forces are in support of El-Sisi, the youth movements of the two revolutions of 25 January and 30 June have decided to rally around Sabahi.”

Gad, however, notes that “most Nasserist and leftist forces which were supposed to support Sabahi have instead opted to endorse El-Sisi. These include old leftist traditional forces like the National Progressive Unionist party (commonly known as Al-Tagammu) and the Arab Nasserist Party,” said Gad.

Within the same context, said Gad, traditional liberal forces such as the Wafd Party, Egypt’s old political party, also announced that they would support El-Sisi, while some of the new post-25 January liberal forces like The Constitution Party (Al-Dostour), established by former UN diplomat Mohamed ElBaradie, are categorically in favour of Sabahi.

Sabahi has said on several occasions that he wants to be the Lula da Silva of Egypt – referring to Brazil’s leftist president from 2002 to 2011.

Like Lula da Silva, who came from the working class, Sabahi said he wants to fight social inequality, rejuvenate the public sector, fight privatisation and defend the ideals of the 25 January and 30 June revolutions, particularly in terms of revoking the new protest law and fighting against the reinstatement of Mubarak’s corrupt elite into political offices.