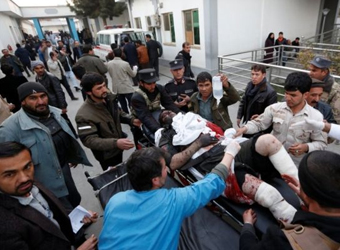 Dozens of people have been killed in a series of militant attacks on Tuesday throughout Afghanistan.

Up to 30 people were killed and 80 wounded in twin bombings near the parliament in the capital, Kabul.

Blasts at the governor’s guesthouse in Kandahar killed at least 11 and injured 14 including the UAE ambassador.

The Kabul blasts took place during rush hour as staff were leaving the parliament complex.

The Taliban said they were responsible for the twin bomb attacks in the centre of the city.

“We planned this attack for quite some time and the plan was to target some senior officers of the intelligence agency,” a Taliban spokesman was reported as saying.

The attack is the latest in a series carried out by the Taliban over the past year. Most of the victims on Tuesday are said to be civilians, including parliament staff.

Reports speak of a suicide bomber striking first outside the entrance to parliament, followed by a car bomb, Tolo News reported.

President Ashraf Ghani vowed that all those behind the “criminal attacks” would be caught.

“The Taliban shamelessly claim credit for the attack on civilians and they’re proud of it,” he said in a statement.

Afghan sources said a district head of the National Directorate of Security – Afghanistan’s main intelligence agency – was among the dead.

An MP from western Herat province, Rahima Jami, was said to have been injured.

An injured parliament security guard named as Zabi told AFP: “The first explosion happened outside the parliament… a number of innocent workers were killed and wounded. It was caused by a suicide bomber on foot.”

He said the car containing a bomb “was parked on the other side of the road and flung me back when it detonated”.

Ahmad Wali, police chief of Kabul’s district 7, told the BBC that the explosions were close to the gates of the city’s American University.

In Kandahar, provincial governor Humayun Azizi was critically injured in the attack on his guesthouse, his spokesperson told the BBC.

The UAE foreign ministry called it a “heinous terrorist attack” in which ambassador Juma Mohammed Abdullah al-Kaabi “and a number of Emirati diplomats” were wounded.

The ambassador and other dignitaries were attending a dinner party when the attack happened.

Tolo News quoted survivors as saying that the bomb was hidden in a guesthouse couch. It said that Kandahar police chief Gen Abdul Raziq was among the guests but was unharmed.

The ambassador had been in Kandahar to lay the foundation stone of an orphanage. His exact condition is not clear.

Earlier, in Lashkar Gah, the capital of Helmand, a Taliban suicide bomber targeted a guesthouse used by an intelligence official, killing at least seven people and wounding six others.