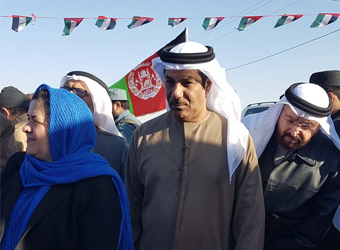 The United Arab Emirates says five of its diplomats were killed in a bombing in Afghanistan’s Kandahar that killed at least 11 people and wounded 17 others, including the UAE Ambassador.

The official Emirati news agency, WAM, said the officials were “on a mission to carry out humanitarian, educational and development projects”.

The blast, which struck the provincial governor’s office during a visit by the UAE delegation, was one of a string of bombings that hit three Afghan cities on Tuesday, killing nearly 50 people and wounding 100.

Dubai’s ruler Sheikh Mohammed bin Rashid Al Maktoum, the UAE’s prime minister and vice president, said on Twitter that “there is no human, moral or religious justification for the bombing and killing of people trying to help” others.

The diplomats were expected to open a number of UAE-backed projects as part of an aid programme to Afghanistan.

In honour of the dead, government institutions across the UAE were directed to fly the flag at half-mast for three days.

The Taliban denied carrying out the bombing, saying the attack was a result of “internal local rivalry”.

Elsewhere on Tuesday, two suicide blasts claimed by the Taliban near Afghanistan’s parliament in Kabul killed at least 30 people and wounded 80.

In a separate incident on the same day, a suicide bomber on foot struck in the southern Helmand province, killing at least seven people, according to officials.

The target of the attack, also claimed by the Taliban, was a guesthouse used by a provincial intelligence official in Lashkar Gah, the provincial capital.

Afghanistan last week welcomed the Pentagon’s decision to deploy some 300 US Marines to Helmand, where American forces engaged in heated combat until they pulled out in 2014.

The Marines will head to the poppy-growing province this spring to assist a NATO-led mission to train Afghan forces, in the latest sign that foreign forces are increasingly being drawn back into the worsening conflict.

NATO officially ended its combat mission in December 2014, but US forces were granted greater powers in June to strike armed groups as President Barack Obama vowed a more aggressive campaign.