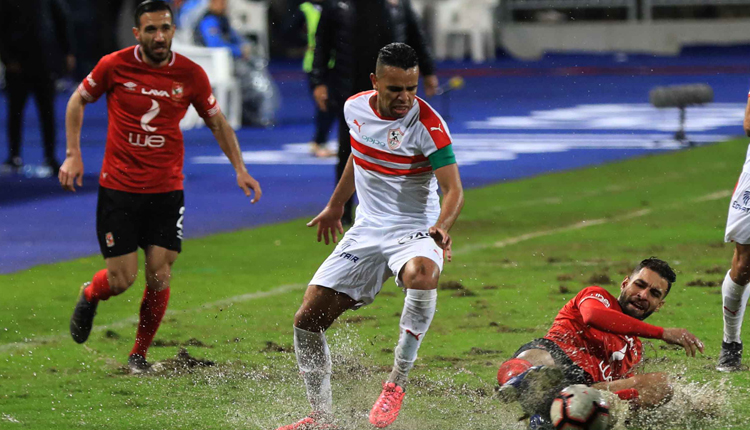 Egypt’s Ahly survived a late comeback from Zamalek to down their arch rivals 3-2 and win the Egyptian Super Cup for an 11th time following an exciting duel at Alexandria’s Borg El-Arab Stadium on Friday.

With the Cairo derby taking place before a limited number of fans for the first time in Egypt since 2013, the Red Devils treated their supporters to an electric first-half display to score two goals without reply, thanks to strikes from Junior Ajayi and winger Hussein El-Shahat.

Nigerian forward Ajayi, back to his dazzling best after he was deployed in a lone striker role, added a third early in the second half as Ahly looked well-equipped to embarrass their Cairo nemesis with a big scoreline.

But an injury to central defender Yasser Ibrahim after the break, with Ahly also losing his defensive partner Mahmoud Metwalli in the first half, allowed Zamalek to push forward and grab a lifeline via two well-taken penalties from Mahmoud Alaa.

But Ahly held on the dying stages to claim the Cairo derby bragging rights for the second time in less than two months, having defeated Zamalek 1-0 on the final day of the league season in July. Both sides also meet next month in the league’s fourth round as the new season gets underway on Saturday.

A gamble from Zamalek’s Serbian coach Micho to play without a recognized striker and rely on long balls looked to have backfired badly, with the team struggling to gain the upper hand despite the presence of veteran winger Mahmoud Shikabala and Moroccan playmaker Achraf Bencharki.

Ahly produced an enterprising first-half display to outplay their feeble opponents, with their intricate passing game slicing open the defence far too easily.

El-Shahat and playmaker Magdi Afsha, who joined in the close season from Pyramids FC, had decent early efforts before Ajayi gave Ahly a deserved lead after 19 minutes.

An inswinging corner found him unmarked at the far post and he made no mistake with a brilliant half-volley with the outside of his right foot that beat keeper Mohamed Awad at his near post.

Ahly closed down spaces in the midfield and launched rapid attacks once they won possession, with Afsha at the heart of almost all their moves.

They went two up on the stroke of halftime after a brilliant individual move from El-Shahat, who flicked the ball over Tunisian full-back Hamdi Nagguez on the left before firing a stinging shot that was palmed away by Awad.

Left-back Mohamed Abdel-Shafi attempted to head the ball away, only to send it across the area for El-Shahat to poke home.

The fans had barely returned to their seats early in the second half when Ajayi netted again in the 49th minute after Shikabala was robbed on the flank.

Ramadan Sobhi pounced on Shikabala’s mistake to feed Ajayi, who swiveled between two markers to wrong-foot Awad with a low shot.

The introduction of Zamalek striker Mostafa Mohamed spurred their attack as he made an instant impact. He won a penalty on 63 minutes after latching onto a through pass before being tripped by keeper Mohamed El-Shennawi.

Alaa fired low into the bottom corner and further narrowed the gap 11 minutes later with a carbon-copy spot kick after Hamdi Fathi had felled Bencharki.

However, Ahly managed to survive a late onslaught to win the season’s curtain-raiser.