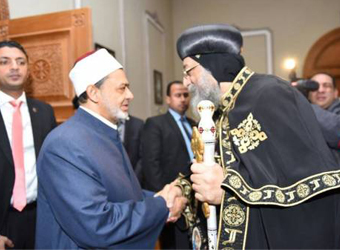 Al-Azhar Grand Imam Ahmed El-Tayeb paid a visit on Wednesday to the Coptic Cathedral in Cairo to offer tidings to Pope Tawadros II on the occasion of the Coptic Orthodox Christmas on 7 January.

El-Tayeb was accompanied by high clergymen and youth from Al-Azhar institution.

The Grand Imam told Pope Tawadros that the enduring reality of tolerance among Egyptians is far too strong to be spoiled by any criminal act, highlighting the long history of brotherly relations that bind Egypt’s Al-Azhar and the Coptic Church.

Pope Tawadros II said that the relationship between Muslims and Christians in Egypt, which dates back thousands of years, serves as a role model of coexistence.

On Tuesday, Egypt’s Minister of Religious Endowments Mohamed Mokhtar Gomaa visited the Coptic Cathedral to extend his good wishes prior to the holiday.

The Coptic Church celebrates this year’s Christmas in the aftermath of a deadly suicide bombing on 11 December on St. Peter and St. Paul’s Church — which is adjacent to the main Coptic Cathedral complex in central Cairo.

Twenty-seven people, mainly women and children, died in the attack, which was later claimed by the Islamic State militant group.

The Egyptian army has completed the renovation of the bombed church on 31 December.

President Abdel-Fattah El-Sisi had ordered that St. Peter and St. Paul’s Church be renovated in time for the holiday on 7 January.