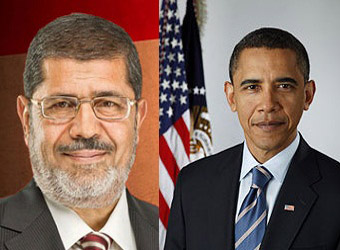 The Obama administration should stop sending taxpayer dollars to nations that embrace Islamic terrorism — nations that behave like adversaries, not allies.

Case in point: Egypt and the radical Muslim Brotherhood. The Obama administration recently agreed to spend an additional $250 million in taxpayer funds to send weapons to this increasingly unstable nation.

That’s in addition to the more than $1 billion annual taxpayer giveaway to Egypt. The U.S. is putting highly sophisticated tanks and warplanes in the hands of terrorists — terrorists who are hostile to America and to our ally, Israel.

Egyptian President Mohammed Morsi is a blatant and outspoken anti-Semite who calls Jews the “descendants of apes and pigs” and says that Egyptian children should be “nursed” on “hatred” for Israel.

The Muslim Brotherhood, the governing political body in Egypt, is widely recognized as an organization that inspires and supports terrorism and is affiliated with the terrorist group, Hamas. Al-Qaida’s leader, Ayman al-Zawahiri, even has direct ties to the Muslim Brotherhood.

Egypt is now becoming not just a source of terrorists but also a launching pad for terror attacks; including deadly ones launched against Israel from Egyptian soil. And Egyptian terrorists were present in the 2012 Benghazi attack and in the recent attack and violence in Algeria. There also are credible reports that Egyptian authorities denied the U.S. direct access to a Benghazi terrorist suspect, a disturbing act from an alleged “ally.”

Egypt has passed a Shariah-based constitution that restricts religious freedom and provides a legal basis for continued persecution of Egypt’s embattled Christian minority. The government-backed persecution of Coptic Christians gets worse by the day.

The reaction from the Obama administration? Send Egypt hundreds of millions of dollars in high-tech weapons — 200 M1A1 Abrams battle tanks and some 20 F-16 fighters. The most recent shipment of four warplanes was sent to Egypt just weeks ago. Eight more F-16’s will be delivered by the end of the year. The troubling fact is that the U.S. has become Egypt’s major arms supplier.

This is not only dangerous to our national security, but it also represents an extremely significant threat to Israel. As Rep. Louie Gohmert, R-Texas, put it: “Friends don’t send U.S. taxpayer-funded F-16s and tanks to the enemies of their friends.”

Every new F-16 or tank delivered to Egypt is another weapon that can be used to consolidate the Muslim Brotherhood’s grip on power. Every new dollar of economic aid buys the Brotherhood more time.

For President Morsi, this aid represents far more than a marginal increase in military and economic strength; it represents an American seal of approval and a stamp of legitimacy on his repressive regime. Every F-16, every Abrams tank is a propaganda victory for the Morsi regime.

Egypt still has a chance for moderation. After all, few things cure radical impulses better than the experience of radical rule, and the country does have a long recent history of peace with Israel. But moderation will be infinitely more difficult to achieve if we arm and aid its most dangerous enemies.

With Americans asked to tighten their financial belts because of the sequester, our government should withhold sending hundreds of millions in taxpayer funds to nations like Egypt, until we get proof — and that means actions, not just words — that they are a true ally. It’s time we sequester terrorists.

And we don’t need U.S. taxpayers footing the bill.

Jay Sekulow is chief counsel of the American Center for Law and Justice.

SANTA CLARA, Calif. — Those who would like the United States to back off of its 2011 pledge to provide $1 billion in aid to Egypt, because of fears that that the Muslim Brotherhood’s Freedom and Justice Party rules the government, are failing to see the long-term advantages to the United States of such aid.

By continuing to support Egypt through the cash infusions, military assistance and loan guarantees for Americans doing business in Egypt, the United States can accomplish three major objectives:

Help ensure that one of the most important regional players in the Middle East remains a U.S. ally.

Use the leverage from the aid to ensure Egypt honors its Camp David peace treaty with Israel.

Send a clear, unambiguous message to newly democratizing countries that their elections will be honored by America regardless of the outcome.

First, whether we like it or not, the democratically elected Muslim Brotherhood is here to stay, and will continue to play a major role in Egyptian politics for years to come.

America’s goal should be to encourage peaceful political participation through electoral means, not to punish the country for electing an Islamist party. The Muslim Brotherhood represents an important political force among a new segment of participatory Islamists.

Secondly, the aid will not undermine our support for Israel, which has been the beneficiary of a disproportionate level of American aid — $118 billion in aid since World War II, according to the Congressional Research Service — relative to Egypt.

By law, all assistance to Egypt is contingent on the country’s meeting certain requirements, including adherence to basic democratic values and maintaining the Camp David peace treaty with Israel.

In fact, cutting U.S. aid will likely alter Egypt’s calculation with Israel: To a large extent, the aid provides the necessary motivation for the Egyptian government to support the Camp David Accords. Without it, there will be far less incentive to support the peace agreement with its Jewish neighbor.

Thirdly, the aid will enhance and build on our relationship with the Egyptian Muslim Brotherhood, and that will improve our standing among other Arab and Muslim countries.

Branches of the Muslim Brotherhood will continue to be the leaders among Sunni Islamists and influence the democratization trend in many other Muslim majority countries including Tunisia, Jordan, Yemen, Palestinian Territory, Syria, Libya, Algeria and Morocco. We should make sure we are on the positive side of history as the region continues to transform over the next decade.

Finally, the $1.3 billion in military assistance that we provide to Egypt is good for America, since much of it comes back to the military industry and corporations such as Lockheed Martin and General Dynamics for equipment and services, as well as the local communities across the country that rely on these industries.

Cutting that aid would ultimately hurt American jobs, since the Pentagon’s foreign-aid weapon purchases for foreign contracts such as Israel or Egypt help bolster jobs in places like Alabama, Florida, Michigan, Ohio and Pennsylvania — these states where much of the military hardware is built.

The State Department clearly believes that aid to Egypt is the right course of action, with spokeswoman Victoria Nuland recently saying that it “demonstrates our strong support for Egypt’s enduring role as a security partner and leader in promoting regional stability and peace.”

We should not lose sight of that in these transformative times.

Obama Says US Concerned about Egypt Protests, Working to Protect US Embassy, Consulates

Egypt ‘Could Slide into Civil War’