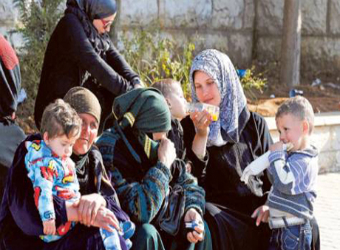 The lives of three Syrian asylum seekers in Egypt facing forcible deportation are in grave danger, according to a Friday statement by human rights watchdog Amnesty International.

The three men, among more than 140 Syrian refugees held in the Rosetta police station after they were forced to abandon their ship on the Mediterranean coast on 14 April, were told they would be returned to Syria if they were not able to afford plane tickets to Lebanon, Turkey or Malaysia—the countries where they had first sought asylum.

“Forcibly sending back refugees and asylum seekers who have sought safety in Egypt is a cruel betrayal of the authorities’ international obligation to offer protection to refugees. If any of them are returned to Syria their lives could be in grave danger,” said Middle East and North Africa Deputy Director at Amnesty International  Hassiba Hadj Sahraoui.

The group of refugees, being held in the courtyard of the Rosetta police station, 60 km east of Alexandria, are mostly Syrian and Palestinian refugees, but include one Eritrean and one Ethiopian. Among the group of over 140 refugees, 68 are children.

The refugees were initially arrested for illegal immigration, but the charges were later dropped. It is unclear how long their detainment will last.

“Egypt must stop shirking its responsibility towards those seeking refuge in Egypt. The authorities have repeatedly displayed a chilling lack of compassion to the plight of refugees from Syria who often suffer routine discrimination and detention,” said Sahroui.

“Many of them have escaped the bloody conflict in Syria, only to face further misery in Egypt. They should be immediately released and granted access to asylum procedures.”

There are more than 136,000 refugees from Syria currently in Egypt, according to Amnesty International. There have been frequent instances in which refugees have faced abuse and discrimination from both the authorities and the Egyptian people.

Several dozen refugees from Syria were held at a police station for several weeks in November and December of last year. Their treatment received widespread condemnation from rights groups including Amnesty International, Human Rights Watch, and the UNHCR.

The Ministry of Interior could not be reached for comment.