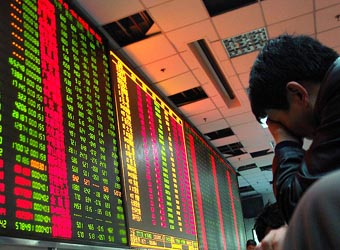 Markets in Japan and China were mixed on Christmas Day, with light trading expected on the heels of another record week for Wall Street.

The Nikkei 225 and Topix indexes gained ground, though both indexes moved only marginally.

China’s Shanghai Composite was down by 0.51 percent at 1:41 p.m. HK/SIN, and the Shenzhen exchange was near 1 percent lower as measured by the SZSE index.

Exchanges in much of the world will remain closed on Monday, including Australia, South Korea, Hong Kong and Singapore.

Taiwanese stocks were largely flat, moving in a narrow range close to their previous close.

The Japanese yen was lower against the U.S. dollar, while in China, the central bank set its official yuan midpoint at the highest level in over three months at 6.5683 per dollar, Reuters reported.

No major economic data is scheduled for release Monday.

Shares of Nippon Carbon were up as much as 7.2 percent on news.

U.S. stocks racked up more weekly gains, though they closed slightly lower for the day on Friday. The Dow Jones industrial average and the S&P 500 posted gains for the fifth straight week, after U.S. President Donald Trump signed a bill that slashes corporate taxes.

Trump’s tax plan cuts the statutory corporate tax rate from 35 percent to 21 percent, though actual tax rates may drop into the single digits because of corporate deductions that were left in, as CNBC reported Thursday.

Investors have enthused over the tax cuts, which they see prompting major U.S. corporations to buy back stock from shareholders.