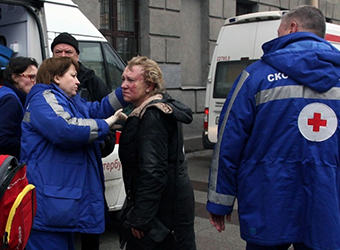 At least nine people have been killed and 20 more wounded in a bomb blast rocked the St Petersburg metro system.

Earlier Russian media reports reported 10 were killed and 50 injured and said there were two blasts.

An unidentified explosive device went off at 2:20pm on a train leaving the Technology Institute station and heading to the Sennaya Ploshchad station, Russia’s National Anti-Terrorist Committee said.

Officials may have caught the organiser of the attacks on CCTV, Russian news agency Interfax reported.

The blast came as Russian President Vladimir Putin was visiting the city, his hometown. He said investigators are looking into whether the explosion was a terror attack.

Interfax cited a source saying the blast was caused by a bomb filled with shrapnel.

Fifty people were injured in the blast, Andrey Kibitov, the head of the city governor’s press service said on Twitter.

Ambulances and fire engines descended on the concrete-and-glass Sennaya Ploshchad metro station near the centre of the former Russian imperial capital. A helicopter hovered overhead as crowds gathered.

The St. Petersburg subway immediately shut down all of its stations and the national anti-terrorism body said security measures would be tightened all key transport facilities across Russia.

Video footage posted on social media showed injured people lying bleeding on the platform, some being treated by emergency services and fellow passengers.

Others ran away from the platform amid clouds of smoke, some screaming or holding their hands to their faces.

A huge hole was blasted in the side of a carriage with metal wreckage strewn across the platform. Passengers were seen hammering at the windows of one closed carriage.

Russian TV said many had suffered lacerations from glass shards and metal.

Video footage posted on social media showed injured people lying bleeding on the platform, some being treated by emergency services and fellow passengers.

Others ran away from the platform amid clouds of smoke, some screaming or holding their hands to their faces.

A huge hole was blasted in the side of a carriage with metal wreckage strewn across the platform. Passengers were seen hammering at the windows of one closed carriage.

Russian TV said many had suffered lacerations from glass shards and metal.

Witnesses described the horrific injuries suffered by the victims.

An eyewitness said that when smoke started pouring out of the carriages, people began to flee in panic.

“Smoke poured out of the carriages. We were told to move to the exit, because the movement stopped. People just fled. My girlfriend was in the next car that exploded.

“She said that he began to shake. When she came out, she saw that people were mutilated.”

Investigators are looking into a possible terror attack and other theories for the St Petersburg subway blast, Mr Putin said.

“The causes of this event have not been determined yet, so it’s too early to talk about [possible causes],” he said.

“The investigation will show. Certainly, we will consider all variants, common, criminal, first of all, of a terrorist nature.”

Mr Putin said that the cause of the incident still isn’t clear, but he had spoken to the heads of the Russian security services.

He was visiting the city and was expected to hold talks with the Belarusian president later in the day.

He offered his condolences to the families of those killed in the attack.

“I appeal to you citizens of St. Petersburg and guests of our city to be alert, attentive and cautious and to behave in a responsible matter in light of events,” St Petersburg Governor Georgy Poltavchenko said in an address.

“My sympathies are with the victims and their families.”

NATO Secretary General Jens Stoltenberg tweeted his sympathies and as did Vice-President of the EU Commission Federica Mogherini.

The two stations that were the site of the blast are some of the subway’s busiest.

Moscow’s deputy mayor has said the authorities are tightening security on the Moscow subway after the blasts in St Petersburg.

“The Moscow metro is taking up additional security measures in the framework of the federal law on Russia’s transport security,” a statement posted to Telegram said.

“Authorities of the Moscow metro are ready to provide any assistance to the St Petersburg metro if needed.”

Russia has been the target of attacks by Chechen militants in past years and Chechen rebel leaders have frequently threatened further attacks.

Over 330 people, half of them children, were killed in 2004 when police stormed a school in southern Russia after a hostage taking by Islamist militants.

In 2002, 120 hostages were killed when police stormed a Moscow theatre to end another hostage taking.

Isis, which has drawn recruits from the ranks of Chechen rebels, has also threatened attacks across Russia in retaliation for Russian military intervention in Syria.

Russian air force and special forces have been backing President Bashar al-Assad in fighting rebel groups and Isis fighters now being driven out of their Syrian strongholds.

Supporters of the terror group have celebrated the explosion, though no group has claimed responsibility.

The Foreign Office currently warns of “a high threat from terrorism” in Russia, and says “further attacks are likely.”

The travel advice adds: “Although there’s no indication that British nationals or interests have been specific targets, attacks could be indiscriminate, including in places visited by foreigners.”