International News
By Administrator On Mar 6, 2012 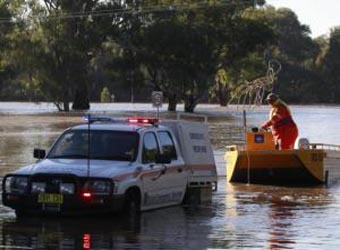 Floods across eastern Australia forced more than 13,000 people to evacuate their homes on Tuesday after record-high summer rains drenched three states over the past week, swelling rivers and forcing dams to overflow.

In the worst-hit state of New South Wales, authorities ordered 8,000 people to leave their homes in the inland city of Wagga Wagga, where flood waters were expected to breach an 11-meter levee and swamp houses and the main business district.

Thousands of people in Wagga Wagga moved to shelter at local schools, while the center of the town, home to around 60,000 people, was deserted on Tuesday.

The Sydney Morning Herald reported that more than 700 properties have been evacuated around the city. It published aerial pictures of the surrounding farmland, which it described as looking “like an archipelago of green islands in a muddy sea”.

“If the levee is breached, we would expect significant inundation and we would expect that to happen very quickly,” State Emergency Service Assistant Commissioner Mark Murdoch told reporters.

Heavy rains across Australia’s east over the past week also prompted flood warnings in the northern Queensland state, and in Victoria, where residents in some small towns have been warned to prepare to evacuate if conditions worsen. Two people have been killed in flood waters over the past week.

The heavy rains filled Sydney’s Warragamba Dam, which overflowed on the weekend for the first time in 13 years, while Canberra’s Cotter Dam has filled with water spilling over a new dam wall currently under construction.

The national government has made the military available to help with the floods, but said it was too early to determine the cost of damage or impact on the economy.

“It is impossible to quantify economic damage until the flood waters subside,” Prime Minister Julia Gillard told reporters in Canberra.

But the Premier of New South Wales Barry O’Farrell earlier said the damage bill could be as high as $530 million (A$500 million).

U.S. seeks to continue its Strategic Partnership with Egypt