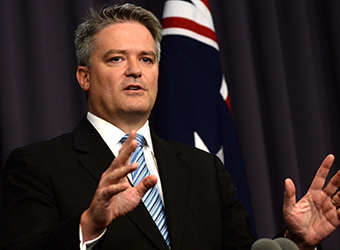 The world’s 12th largest economy is on track to return to a budget surplus by the 2020-2021 financial year, as predicted in June, Australian Finance Minister Mathias Cormann moved to reassure investors on Monday.

Since coming to power in 2013, the current administration has made significant progress in the face of major global headwinds, the Belgian-born politician told CNBC’s “Street Signs.”

Australia’s budget shortfalls are set to widen over the next four years, according to the government’s Mid-Year Economic and Fiscal Outlook released on Monday.

“The net effect of the budget improvement measures we’ve implemented since 2013 amounts to a A$250 billion improvement to the budget bottom-line over the medium term,” Cormann noted. “We’re conscious that more work needs to be done but we would argue that we’re now heading in the right direction. When we came into government, spending as a share of GDP was headed for 26.5 percent but it’s now down to 25.2 percent,” he continued.

The benchmark equity index rose nearly 1 percent following Monday’s update, while the Australian dollar was unchanged at around 73 U.S. cents.

“What saved the government’s bacon this year (2016-17) is the fact that they forecasted terms of trade at 14 percent, versus 1 and a quarter perfect in their previous estimate,” Nicki Hutley, chief economist at Urbis told CNBC’s “Squawk Box Asia.”

Essentially, Monday’s report is just saying the economy’s got worse but luckily, the terms of trade have swung around in the past six months so this year looks better, but over the next four years, we’re A$10 billion worse, she summed up.

A string of sustained deficits led many to believe that Australia was on the brink of losing its prized ‘AAA’ sovereign rating after Standard & Poor’s (S&P) warned in July that continued deficits would be inconsistent with a ‘AAA’ rating.

But the risk of a ratings downgrade subsided on Monday after Fitch, Moody’s and S&P said the budget update did not immediately impact the country’s rating.

Outside of Australia, only a handful of countries boast a ‘AAA’ grade, including Canada, Denmark, Germany, Hong Kong, Liechtenstein, Luxembourg, Netherlands, Norway, Singapore, Sweden, and Switzerland.

S&P said Canberra was not in danger of an immediate downgrade, but it did warn that Monday’s worsening projections increased the risk of a future downgrade.

“Over the coming months we will continue to monitor the government’s willingness and ability to enact new budget savings or revenue measures to reduce fiscal deficits materially over the next few years,” the agency said in a statement.

“Today’s update confirms that the economy is weaker than what most economists were expecting,” he explained. A key pillar of growth in recent years has been the strong housing sector, but the construction cycle is now slowing so the future does indeed look grim, he added.

Tunrnbull’s conservative government must unveil new policy changes in order to prevent a downgrade, Hutley warned. “If we don’t do something now, eventually we’ll end up in a banana republic,” Hutley continued, referring to a term used for countries that depend on exports of a certain resource.