Barcelona wins to move within 1 point of Real Madrid 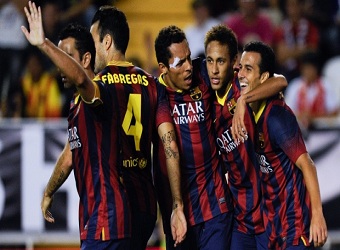 Barcelona moved to within one point of Real Madrid at the top of La Liga with victory over Athletic Bilbao.

Paco Alcacer scored his first La Liga goal for Barcelona on a rare start, with Luis Suarez rested, when he turned home Neymar’s cross from 10 yards.

Lionel Messi doubled the lead when he beat Athletic keeper Gorka Iraizoz at his near post from a right-wing free-kick.

And Aleix Vidal sealed the win after a solo run past several defenders.

His goal meant Barca became the first European team to score 100 times in all competitions this season, with Monaco also reaching the landmark later in the afternoon.

Real Madrid- whose scheduled match away to Celta Vigo on Sunday has been postponed because of storm damage to the hosts’ stadium- has two games in hand on Barca.

Sevilla- who are three points behind Barcelona- host Villarreal on Sunday (11:00 GMT).

In Saturday’s other La Liga matches, Sergi Enrich scored twice as Eibar climbed to seventh with a 4-0 victory at 10-man Valencia, who had Carlos Soler sent off, while Espanyol won 1-0 at Malaga.