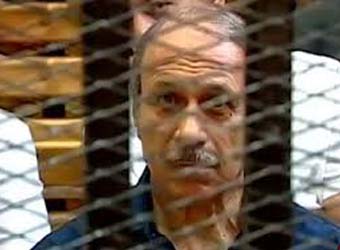 Share
Egypt’s Court of Cassation overturned on Thursday a seven-year prison sentence for former Interior Minister Habib El-Adly on charges of illicit gains, ordering a retrial.
El-Adly and 12 other defendants in the case were convicted by a lower court in April 2017 on charges of illicit gains of EGP 2 billion from the interior ministry in the period between 2000 to 2011. The Court of Cassation ordered the retrial of all defendants in the case.
El-Adly served as minister of interior under former President Hosni Mubarak from 1997 until Mubarak was ousted in 2011.
Following the April 2017 ruling, El-Adly disappeared until he was arrested in December by security forces.
In May 2017, the former minister lost an initial appeal against the sentence in the case due to failure to appear in person in court.
El-Adly’s lawyer Fareed El-Deeb appealed against the criminal court’s ruling before the Court of Cassation.
The former minister is set to be released from his detention within hours upon the completion of legal procedures.
The long-serving former minister faced several trials since the ouster President Mubarak in the January 2011 revolution, including for the killing of protesters and the cutting of telecommunications, but he was acquitted in all of the cases except for two.
In 2013, El-Adly was sentenced to three years in prison in the case known in the media as “the conscripts’ enslavement case.” The Cassation Court upheld that ruling in February 2014.

The current illicit gains trial is the last case pending against El-Adly.