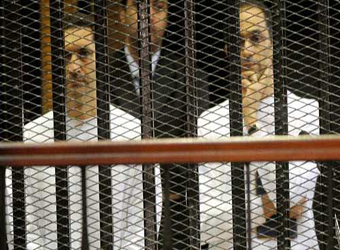 Cairo Criminal Court postponed Wednesday the trial of Gamal and Alaa Mubarak, the sons of former president Hosni Mubarak, and seven others to 17 December in the case of selling the Egyptian National Bank.

The postponement decision comes as the court awaits receiving the technical opinion of the committee of five experts assigned to study the case, according to state media.

The former president’s sons are accused of making illicit gains out of the sale of the Egyptian National Bank and are also facing charges of insider trading on the Egyptian Exchange (EGX).

In May 2012, the former attorney general Abdul Meguid Mahmoud referred the defendants to the criminal court.

The defendants face accusations of making more than 493 million Egyptian pounds in illicit gains from the bargain of the sale of the national bank, with the help of others in the governmental sector, and with help of an offshore company in Cyprus.

In October 2015, the Mubarak sons were released from detention, after their lawyer Farid El-Deeb claimed they had completed, even exceeded by six months, their three-year prison term.