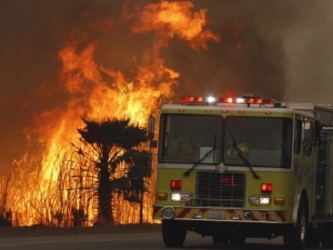 The most destructive wildfire raging in southern California has expanded significantly, scorching an area larger than New York City.

The Thomas fire in Ventura and Santa Barbara counties has consumed 230,000 acres in the past week.

Fanned by strong winds, it has become the fifth largest wildfire in recorded state history after it grew by more than 50,000 acres in a day.

Residents in coastal beach communities have been ordered to leave.

On Sunday, firefighters reported that 15% of the blaze had been contained but were forced to downgrade that to 10% as it continued to spread.

“This is a menacing fire, certainly, but we have a lot of people working very diligently to bring it under control,” Santa Barbara County Sheriff Bill Brown said.

The containment operation is not only being hampered by dry winds. It is proving challenging for firefighters because of the location and mountainous terrain.

An analyst with the California fire protection department, Tim Chavez, said the emergency services were struggling because “a hot interior” was in parts practically meeting the ocean, making access difficult.

The other fires hitting California are largely controlled, but 200,000 people have evacuated their homes and some 800 buildings have been destroyed since 4 December.

Forecasters said wind speeds were expected to increase throughout the day, before dying down again overnight.

The local fire department tweeted pictures of a wall of flames advancing on homes on the outskirts of Carpinteria early on Sunday morning.

California has spent the past seven days battling wildfires. Six large blazes, and other smaller ones, erupted on Monday night in southern California.

The Thomas Fire – named according to where it started, near the Thomas Aquinas College – is by far the largest of the fires.

They swept through tens of thousands of acres in a matter of hours, driven by extreme weather, including low humidity, high winds and parched ground.

The authorities issued a purple alert – the highest level warning – amid what it called “extremely critical fire weather”, while US President Donald Trump declared a state of emergency.

On Saturday, California Governor Jerry Brown described the situation as “the new normal” and predicted vast fires, fuelled by climate change, “could happen every year or every few years”.

Several firefighters have been injured, but only one person has died – a 70-year-old woman who was found dead in her car on an evacuation route.