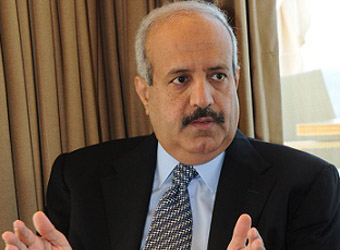 Adnan Youssef, Chairman of the Union of Arab Banks and President & Chief Executive of Al Baraka Banking Group, said that Egyptian banks proved to be strong as they withstand all global economic crises thanks to Central Bank of Egypt’s good performance.

Youssef said in his meeting with media representatives in Egypt on Sunday that Egyptian banks are known for their commitment to foreign and international treaties.

Youssef criticized some bureaucratic procedures in Egypt that hinders more investments to be injected. This unstable status decreased the transfers to Egypt from Egyptian living abroad.

Bahrain’s economic growth volume will reach 4% by the end of 2012, Youssef expected. Bahrain is the financial center in Middle East and that is has 419 commercial and Islamic financial institutions.

Regarding issuing a common currency for Arab Gulf countries, Youssef said that some gulf countries preferred to slow down the process of issuing the currency because of the current difficulties facing euro.

Islamic “Mega Bank” is being established since 2009. Many countries such as Bahrain, Qatar, United Arab Emirates and Malaysia expressed their willingness to host this Bank, but the global economic crisis is the reason behind delaying this project. However, Islamic Development Bank in Jeddah wanted to launch this large Islamic institution, Yousif explained.

Arab Countries is not in need for new funds. However, financing resources shall be raised for these funds. Egypt and Sudan have to focus their attention on agriculture because they enjoy large arable lands, irrigation resources and qualified workforce.

After solving issues relating to customs and taxes, an Arab common market can be established.

Bahrain’s credit rating declined as a result of the turmoil Bahrain witnessed in February and March in 2011, but now Bahrain credit rating is good, Youssef concluded.