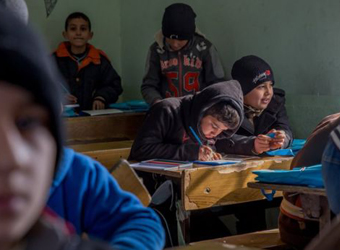 Thousands of Iraqi children are returning back to school in eastern areas of Mosul that have been cleared of Islamic State militants by government forces.

The UN Children’s Fund said 30 schools had reopened on Sunday, allowing 16,000 children to resume their education after two years of jihadist rule.

Iraq’s Prime Minister, Haider al-Abadi, has announced that the east of the city is now fully clear of IS.

However, deadly fighting was reported in eastern districts on Tuesday.

Photos published by Reuters news agency show Iraqi soldiers examining the dead bodies of IS fighters in what is said to be the Intisar district.

Further north, also east of the River Tigris, Iraqi troops said they had liberated the Rashidiyah district, as well as the villages of Haditha and Jurf al-Milih.

Government-led forces began their offensive against IS in Mosul in October. It is the group’s last major urban stronghold in Iraq but the jihadist group still controls several large towns and large parts of Syria.

An additional 40 schools are expected to open in the coming weeks after being checked for unexploded ordnances.

IS uses schools to indoctrinate children into its extremist ideology.

Boys adhere to a rigid curriculum, where drawing, history, philosophy and social studies, considered by IS to be “the methodology of atheism”, are removed. They must instead memorise verses of the Koran and attend “jihadist training”, which includes firing weapons and martial arts.

Girls – most of whom were banned from getting an education in Mosul – are veiled and taught how to cook, clean and support their future husbands.

Unicef said it was supporting the Iraqi authorities in their efforts to rehabilitate, equip and open schools as the security situation improved in previously contested areas.

Many buildings were used for military purposes or were badly damaged by the fighting.

School supplies for 120,000 students in eastern Mosul have been put in place and Unicef is retraining teachers, introducing accelerated learning programmes for children and launching awareness campaigns against violence.

“After the nightmare of the past two years, this is a pivotal moment for the children of Mosul to reclaim their education and their hope for a better future,” said Peter Hawkins, Unicef representative in Iraq.

Another 13,200 children living in camps outside Mosul, who are among the 180,000 people who have fled the city since the government launched an offensive 100 days ago, are also being helped to get an education.

Also on Tuesday, the UN’s humanitarian co-ordinator for Iraq expressed deep concern for the estimated 750,000 civilians trapped in IS-held western Mosul, as troops prepare to retake it.

“The reports from inside western Mosul are distressing,” she said in a statement also signed by 20 international and local aid groups.

“All the evidence points to a sharply deteriorating situation. The prices of basic food and supplies are soaring. Water and electricity are intermittent in neighbourhoods and many families without income are eating only once a day. Others are being forced to burn furniture to stay warm.”

Ms Grande could not rule out the possibility of siege-like conditions or a mass exodus, and noted that almost half of all casualties from Mosul had been civilians, with many killed by booby-traps, caught in crossfire or used as human shields.