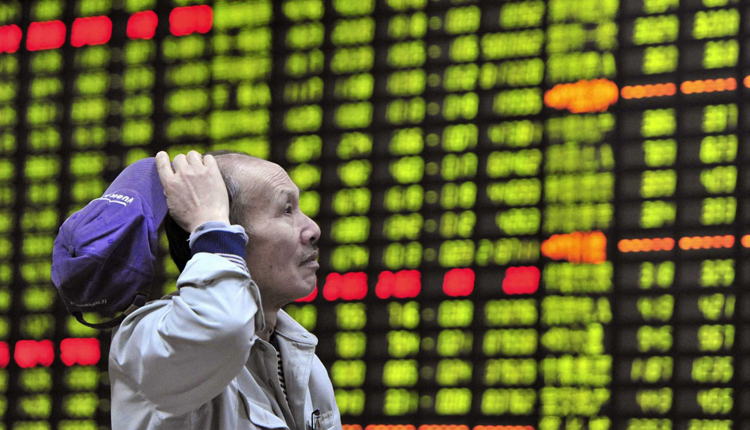 China markets fell on Monday after the central bank cut the reserve requirement for banks over the weekend.

The Shanghai composite fell 2.95 percent while the Shenzhen composite declined by around 2.85 percent on the first trading day since the Golden Week holidays ended. Hong Kong’s Hang Seng index slipped by 0.85 percent in the afternoon.

The People’s Bank of China announced measures on Sunday it was cutting the reserve requirement ratio (RRR) — or the amount of cash that banks have to hold as reserves — by 100 basis points effective Oct. 15. The RRR is currently 15.5 percent for large commercial banks and 13.5 percent for smaller lenders. The move by China’s central bank, its fourth in 2018, came amid concerns about the economic impact of Beijing’s ongoing trade war with Washington.

On the back of that announcement, shares of most major Chinese banks saw sharp declines on Monday. Industrial and Commercial Bank of China fell by 3.81 percent, China Construction Bank tumbled by 4.14 percent while Agricultural Bank of China lost 3.08 percent.

Australia’s markets saw partial recovery but remained lower as the ASX 200 traded down by 1.15 percent in the afternoon, with most sectors trending lower.

The heavily-weighted financial sector traded lower by 1.24 percent, with shares of Australia and New Zealand Banking Group (ANZ) falling by 2.87 percent and Commonwealth Bank of Australia lower by 0.66 percent. The movement in ANZ’s stock came after it announced that its full year 2018 cash profit would be “impacted by additional charges for customer compensation, accelerated amortisation of software and other notable items.”

Other Asian markets were also in negative territory. South Korea’s Kospi index was trading 0.42 percent lower in the afternoon, although industry heavyweight Samsung Electronics held on to gains of 0.56 percent.

In currency news, the U.S. dollar index, which tracks the greenback against a basket of peers, was at 95.724 as of 11:49 a.m. HK/SIN, continuing its rise following a slide in the last trading session.

Last Friday, yields on the U.S. 10-year Treasury note also hit a new 7-year high before settling at around 3.233 percent on the back of unemployment stateside falling to its lowest levels since 1969.

The Japanese yen saw continued weakness at 113.87 against the dollar, while the Australian dollar returned to trade slightly stronger at $0.7054, as of 11:50 a.m. HK/SIN.

In the oil markets, prices remained lower. The global benchmark Brent crude futures contract slid by 1.01 percent to $83.31 per barrel, while the U.S. crude futures contract was still lower by 0.74 percent to $73.79 per barrel. The moves came after a U.S. government official said on Friday that the Trump administration is considering waivers on the country’s impending sanctions on Iran in November.