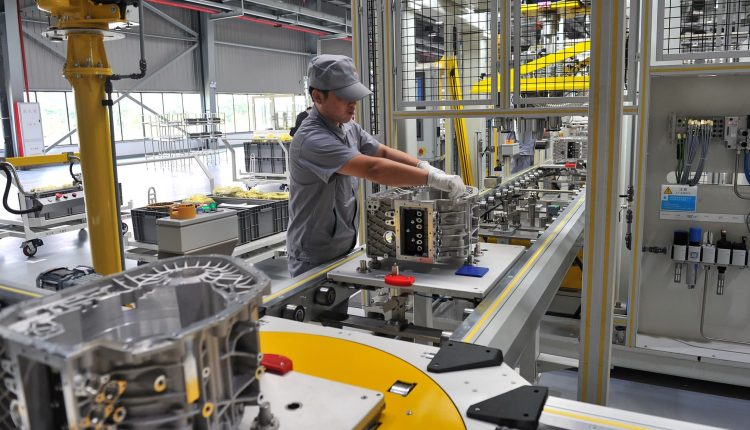 The official Purchasing Managers’ Index (PMI) released on Tuesday fell to 51.2 in July, from 51.5 in June and below the 51.3 in a Reuters poll of economists. It was also the lowest index reading since February but remained above the 50-point mark that separates growth from contraction for a 24th straight month.

Firms were hurt by trade frictions, rain and high temperatures in July, which is also a cyclically slow season for some sectors, said statistics bureau official Zhao Qinghe in a statement released with the data.

The gauge of factory activity is the first major reading of the world’s second largest economy since the second quarter of this year, when China logged a modest slowdown in growth, weighed by government efforts to tackle debt risks and escalating U.S. trade tensions.

ANZ Senior China Economist Betty Wang said while trade tensions were a factor in the moderation in growth, the ongoing deleveraging campaign and unfavorable weather were bigger drivers behind the slowdown.

The PMI’s July new export orders index remained in contraction in July, but did not change from the previous month’s reading of 49.8, a sign trade conditions have not worsened significantly.

However, the sub-index on imports, viewed as a proxy for domestic demand, dipped into contraction in July and was the lowest since February.

“Recent economic policy adjustments are partly meant to address the downside risks in the economy,” Wang wrote in a note.

“While this is likely to lift domestic sentiment over the

medium term, we are mindful of whether China will shift back to pump-priming the economy.”

Beijing and Washington have been engaged in a tit-for-tat exchange of punitive measures and threats of measures against each other’s goods.

China’s June exports growth cooled slightly from the previous month but remained solid, as exporters rushed to move shipments before tariffs went into effect on July 6.

Chinese stock markets were trading slightly lower on Tuesday morning after the data was released, with the Shanghai Composite Index .SSEC down about 0.25 percent.

The manufacturing PMI data showed larger companies continued to expand while small firms contracted at a faster pace in July, highlighting the challenges firms face even amid a years-long government effort to support small companies.

Another survey released by the NBS on Tuesday showed growth in China’s service sector moderating in July, with the official non-manufacturing Purchasing Managers’ Index (PMI) dipping to 54.0 from 55.0 the previous month.

Chinese policymakers are counting on growth in services and consumption to rebalance their economic growth model from its heavy reliance on investment and exports. The services sector now accounts for more than half of the economy, with rising wages giving Chinese consumers more spending clout.

However, factory output growth in June slumped to a four-year low while year-to-date retail sales also cooled, an indication that both the industrial and consumer sectors are losing momentum.

A reading on the construction industry fell 1.2 points to 59.5 in July.

In an effort to help soften the blow to the economy from the Sino-U.S. trade war, Beijing plans to put more money into infrastructure projects and ease borrowing curbs on local governments, according to a Reuters exclusive citing policy sources.

The composite PMI, which covers both manufacturing and services activity, slipped to 53.6 in July, from June’s 54.4.