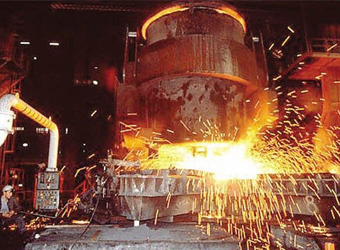 China’s steel prices are soaring, and the government is getting worried about striking the right balance on the markets.

China, the world’s largest steel producer, has been working to tackle overcapacity in the sector, as the government seeks to find economic growth outside of heavy industry and manufacturing, The cutbacks also come amid long-time claims by the U.S. and Europe that China was selling its unwanted steel at lower prices on global markets, hurting producers elsewhere.

In March, the government announced plans to slash steel capacity by 50 million metric tons this year in efforts to tackle pollution and curb excess supply. Experts say the prospect of limited steel is pushing prices up, and it’s got authorities worried about market volatility. China is also the world’s top steel consumer, so higher prices translates to better profits for industry, but it also means increased costs for sectors like construction that use much of the alloy.

The government is convening meetings this week with regulators and industry executives as prices have surged, Reuters reported, citing a source at the China Iron and Steel Association.

So far this year, steel rebar futures have rallied on the Shanghai Futures Exchange — the September 2017 contract is up 40 percent to date, and is sitting today at around 4,131 yuan, according to Reuters data.

Even on Monday, the price of hot-rolled coil, a key steel product, surged 5 percent after Hebei province announced new measures to limit steel production to half of its capacity during the winter months, Nomura analysts wrote in a note. Hebei accounted for nearly one-fourth of China’s total steel production in the first half of this year.

In the long run, analysts and companies expect higher prices to stay as the cutbacks continue, with China’s curbs estimated to reduce overall crude steel production by 5 to 10 percent, according to Nomura. China’s steel exports are likely to continue to dip, after falling in July, said Charles Bradford, metals analyst and president at Bradford Research.

“Output in China’s steel industry has sometimes been curtailed temporarily in order to tackle environmental problems, but we think the production cutbacks in the latest measures will be substantial compared to the other occasions,” wrote the Nomura analysts.

For industry, that’s good news when it comes to stronger earnings, especially after China’s faltering economic growth triggered a rout in global commodities over a year ago, prompting industry to pull back on investment and jobs.

S&P Global said on Wednesday it expected India’s Tata Steel to see healthy profitability for the rest of the year. Japan’s steel industry is also seeing a boost in export margins. And South Korea’s steel industry is poised to benefit with less Chinese steel coming in — the country is a major steel export destination for China, and firms there have been in fierce competition with the Chinese.

Baoshan Iron and Steel, China’s largest steel company, fell around 3 percent in the Thursday morning session, but is up 30 percent so far this year.