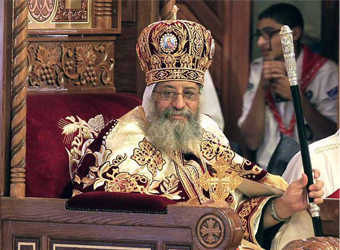 The two church bombings that killed dozens in Egypt this month targeted unity among Muslims and Christians in the most populous Arab nation, Coptic Pope Tawadros II said Tuesday.

Suicide bombers from the Islamic State group attacked two churches in the cities of Tanta and Alexandria on April 9, killing 45 people in the deadliest attacks on Coptic Christians in recent memory.

The attacks which hit on Palm Sunday “were not aimed at Copts only but at the heart of Egypt… They aimed at breaking the unity of Egyptians,” the Tawadros told a news conference in Kuwait City.

“Unity among Egyptians has existed for the past 14 centuries and these attacks will not affect the Egyptian people,” he said.

Copts, who make up about one tenth of Egypt’s population of more than 92 million, have been targeted several times in recent months.

In December, an IS suicide bomber struck a Cairo church, killing 29 people.

Militants and Islamists accuse Copts of supporting the military overthrow of Islamist president Mohamed Morsi in 2013, which ushered in a deadly crackdown on his supporters.

Tawadros, on his first visit to Kuwait where a large Coptic community lives, was met by Emir Sheikh Sabah al-Ahmad Al-Sabah and top officials.

He said Egyptian security forces and the military are doing their role in protecting Christian places of worship which have become a target of attacks in recent years.

The April 9 attacks, weeks before a planned visit by Catholic Pope Francis, prompted the government to declare a three-month state of emergency.