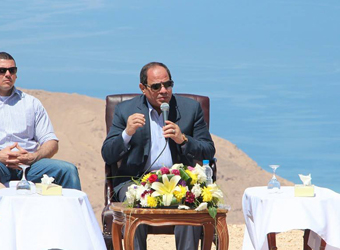 The current troubles faced by Egypt, including its suffering economy and the threat of terrorism, are temporary, Egyptian President Abdel Fattah Sisi said on Tuesday in a speech at a youth conference held in the Suez Canal city of Ismailiya.

Earlier in the day, Sisi hailed the country’s youths and “martyrs” in front of a crowd of some 1,000 young people at the opening ceremony of the three-day gathering, which was broadcast live on national television.

During the event, the president asked attendees to stand for a minute’s silence in honour of the country’s martyrs.

Around 200 senior government official, MPs, and political and public dignitaries are expected to attend the conference, a presidential source told Al-Ahram Arabic earlier this week.

Sisi said that in implementing tough and painful economic reforms, he has been putting the interests of Egypt above his own popularity, adding: “we should live in a country that is properly developed, or leave.”

The government has been implementing a set of economic reforms including floating the local currency, cutting energy subsidies and putting in place a Value-Added Tax.

When asked about the country’s unemployment rate, which stands at over 12 percent, Sisi said that facing this challenge will be tough, since the country’s public sector is already bloated and needs no more that 20 percent of its current workforce to function.

The conference sessions and workshops, due to begin on Wednesday, are planned to address issues including a recent surge in the price of foodstuffs, the government’s efforts to improve the healthcare system, and sustainable development in the fields of gas and power.

This month’s event is the third in a series of such gatherings.

The first regular conference was held in December in Cairo. The decision to hold the regular meetings was announced by the president in October, as one of the takeaways of the first annual National Youth Conference which was held that month.

In January, the second regular youth conference was held in Aswan and tackled challenges facing Upper Egypt, including ways to develop the economy and tourism of the region as well as social and political empowerment among youth.