‘Creative’ Brexit could link Europe back with U.S. and redefine the West: Kissinger 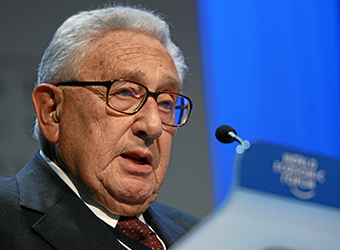 The former U.S. Secretary of State Henry Kissinger has delivered a pragmatic solution for the U.K.’s decision to leave the European Union, saying that its departure could lead to a restructuring in the region that may redefine the West’s role on the global stage.

“I could imagine that Brexit will be used in a creative way not to see how to minimize the damage but how to create a new role for Europe and America in the Atlantic partnership,” the Nobel Peace Prize winner told an audience at the World Economic Forum in Davos.

He explained that in its current form, the EU had issues over the “economy and security” that were “very difficult” to solve in a forum in which unanimity is the absolute requirement. His suggestion was that, whilst maintaining its current structure, the continent could create within it sub groups on finance and security, where decisions could be made with a particular influence from the countries that will have to carry the greatest burden on these issues. This, he said, would be aimed at preventing the occurrence of crises caused by the unwillingness of everyone to meet certain goals.

“Britain could renter Europe as part of these groups and it could also perform a function in linking Europe and America,” he added.