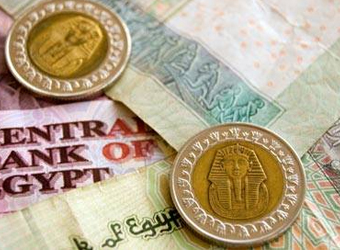 Financial news website Bloomberg reported on Monday that the days of the stagnation of the Egyptian pound may be numbered, explaining that “foreign holders of Egypt’s local debt have been using the open currency market more frequently to get dollars.”

Bloomberg explained that bondholders traded hundreds of millions of dollars on the interbank market during the first five weeks of 2018, and that between 20-30 percent of foreign currency transactions linked to debt instruments are currently carried out through the open market, while the remaining transactions are carried out through the Central Bank of Egypt, which guarantees the exit of money from the country for a fee.

Bloomberg said that this development is a remarkable shift for a country that suffered from a shortage in dollar cash just a few months ago, making it almost impossible for foreign investors to transfer their profits to their countries. This situation prompted policy-makers in Egypt to float the Egyptian pound by the end of 2016, said Bloomberg.

“But it has taken months for investors to build enough confidence to forgo their money-back guarantee,” the report continued.

“With more investors injecting dollars into the interbank market, the Egyptian pound’s volatility will probably rise,” Bloomberg quoted Bilal Khan, a senior economist at Standard Chartered Bank, as saying. “Market forces will have a bigger role in determining the exchange rate than before,” he added.

The reason for the shift of investors to the open market is the availability of dollar cash compared to the past, as well as the Central Bank of Egypt’s decision to raise the cost of using its repatriation mechanism, applying a fee of 1 percent on the flows.

The Central Bank of Egypt announced in February that foreign currency reserves rose by US$1.2 billion to US$38.209 billion by the end of January.

Egypt’s foreign reserves have been climbing since the country secured a US$12 billion, three-year International Monetary Fund, loan program in November 2016, shortly after the country decided to float its currency in a bid to lure back foreign investors and revive its ailing economy.

The currency flotation resulted in soaring inflation and a jump in prices on basic commodities, with some products recording over 50 percent price increases.

Britain may join U.S. strikes against Syria if chemical weapon use proven