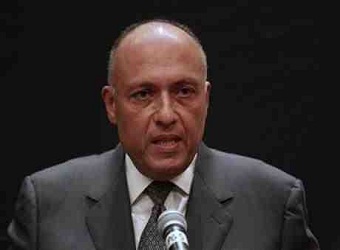 Share
Egypt’s Foreign Minister Sameh Shoukry met in Geneva on Tuesday with Filippo Grandi, the Commissioner of the United Nations High Commissioner for Refugees (UNHCR), where he affirmed Egypt’s moral commitment towards the millions of refugees living in the country.

Shoukry arrived in Switzerland to deliver a speech in front of the UN’s Human Rights Council and a UN sponsored Conference on Disarmament.

Last week, the Disarmament Commission elected Egypt to be among five vice chairs for its 2018 substantive session.

“The foreign minister expressed appreciation for the role of the UNHCR office in Cairo, highlighting the history of cooperation between Egypt and the organisation since 1954,” said a statement by Egypt’s foreign ministry spokesperson Ahmed Abu Zeid.

Grandi expressed appreciation for the efforts and services provided by Egypt to refugees inside the country, especially for Syrian refugees and asylum seekers, describing Egypt as a “role model for many countries” in this regard.

“The minister highlighted the importance of cooperation between Egypt and the UNHCR, especially with the rising numbers of refugees and asylum seekers in the country,” the statement said.

Shoukry also addressed the presidency of the Conference on Disarmament (CD) in this critical juncture of the new session.

“The Conference on Disarmament has been in a stalemate for over two decades and has regrettably been unable, throughout this long period, to adopt a programme of work, despite the sincere efforts exerted in this regard,” Shoukry said in his speech.

“Despite repeated calls by Egypt and the international community, throughout several decades and on numerous occasions and forums, to realise the total and irreversible elimination of nuclear weapons in compliance with one of the main pillars of the NPT, these calls have fallen on deaf ears so far,” Shoukry added.

The minister stressed that nuclear weapons continue to exist in overwhelming numbers, which poses a serious threat to international security.

“In confronting all of these challenges, Egypt stresses the importance of complying with the text and spirit of the Treaty on the Non-proliferation of Nuclear Weapons. We are gravely concerned that even though 48 years have elapsed since the NPT entered into force and the legal obligation contained in Article VI calling nuclear weapon States to pursue nuclear disarmament, nuclear weapons continue to exist worldwide,” the minister said.

Shoukry highlighted that Egypt supports the commencement of negotiations on a treaty banning the production of fissile material for nuclear weapons and other explosive devices (FMCT).

“It is Egypt’s view that a future FMCT treaty necessitates the inclusion of stockpiles of weapon grade materials to ensure that it serves nuclear disarmament and not remain another instrument designed to sustain an unbalanced status quo and to limit concentration on non-proliferation issues,” Shoukry concluded.