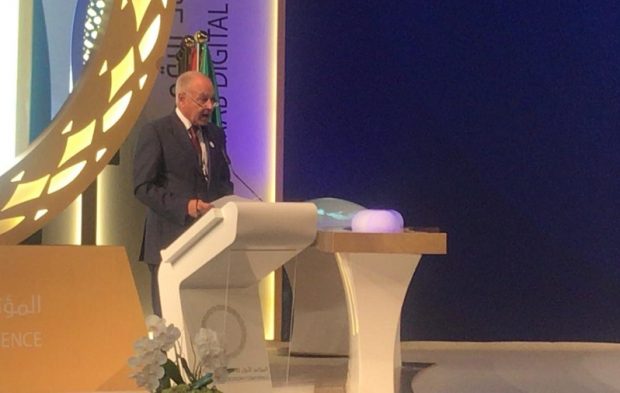 It also help in achieving the financial inclusion supporting economies to keep pace with global economic modernity, he added.

Aboul Gheit made his remarks during the First Arab Digital Economy Conference held in Abu Dhabi under the patronage of Sheikh Mohammed bin Zayed bin Sultan Al-Nahyan, Crown Prince of Abu Dhabi and Deputy Commander of the UAE’s Armed Forces.

He further noted that the ongoing war between the major powers at the global level reflects a race over controlling the digital technology and its future, especially The 5th Generation Cellular Networks (5G) that leads to enormous gains.  In addition, the return of innovation in this technology exceeds the rates of profitability in other sectors, yet it drives other sectors of the economy forward.

We are facing an integrated revolution driven by digital technology and led by artificial intelligence and data applications  (Big Data), some called it the fourth industrial revolution referring its  impact in various  aspects of life. Thus, we should never allow our nations come out of this the battle empty-handed, or be convinced of not so good position in this fierce competition.

He pointed out that  the Arab League has partnered with United Nations Economic and Social Commission for Western Asia in order to  setting a road map for internet governance on the regional and international level.