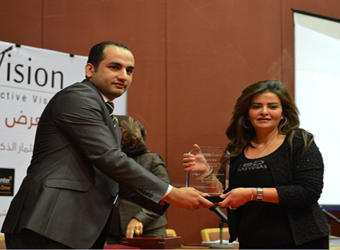 The leading company in the field of Internet Connectivity over Wired, Wireless and Power lines in Middle East, SmartVision, has named Dina Abdel Fattah the best economic media figure in Egypt, citing her distinctly vision, concrete achievements, and her successful efforts to bring important Egyptian and MENA issues to the international stage.

SmartVision Egypt has awarded Abdel Fattah during a ceremony held on Friday in the presence of a number of worldwide economic experts.

The monthly ‘Amwal Al Ghad’ has been also named the best economic magazine in field of money markets. Abdel Fattah is the Editor-in-Chief of ‘Amwal Al Ghad’.

Egypt may debut its Green-Bond on Tuesday With $500…