Does Eating White Rice Raise Your Risk of Diabetes? 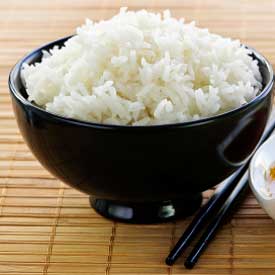 When it comes to your risk of diabetes, a new study by Harvard researchers suggests that eating less white rice could make a difference.

Each additional daily serving of white rice, a staple of Asian diets, may increase the risk of Type 2 diabetes by 10%, according to the study, which analyzed the results of four previous studies involving 352,384 participants from four countries: China, Japan, U.S. and Australia. Those who ate the highest amounts of white rice had a 27% higher risk of diabetes than those who ate the least, and the risk was most pronounced in Asian people.

The studies followed people for anywhere from 4 to 22 years, tracking their food intake. All the participants were diabetes-free at the beginning of the study.

Why white rice may impact diabetes risk isn’t clear, but it may have to do with the food’s high score on the glycemic index (GI) — a measurement of how foods affect blood sugar levels — meaning that it can cause spikes in blood sugar. High GI ranking foods have previously been associated with increased risk of diabetes.

“White rice also lacks nutrients like fiber and magnesium,” says study author Qi Sun, a professor of medicine at the Harvard School of Public Health in Boston. “People with high white rice consumption lack these beneficial nutrients and Asian populations consume a lot of white rice. If you consume brown rice instead, you will get these nutrients. There are alternatives.”

But before you swear off white rice for good, the study authors and other nutrition experts caution that it’s not the only culprit in diabetes risk. Rather, a general decrease in physical activity and increase in food consumption may be responsible for the rise in obesity and insulin resistance in Asian countries.

“White rice has long been a part of Asian diets in which diabetes risk was very low,” Dr. David Katz, associate professor of public health at Yale University, told ABC News. “It is white rice plus aspects of modern living — including less physical work — that conspire to elevate the incidence of Type 2 diabetes.”

Also, according to Sun, white rice is not the only red flag for a diabetes-prone diet. He recommends eating fewer refined carbs overall. “People should try to make a switch from eating refined carbs like white rice and white bread to eating more whole grains. This way, you consume more nutrients and fiber overall.”

For any healthful diet, moderation is key. “I’d tell [patients] what we know for sure,” Keith Ayoob, an associate professor in the department of pediatrics at the Albert Einstein College of Medicine in New York City, also told ABC News. “Take steps to keep from becoming overweight, make physical activity a real priority, include some protein and fiber in each meal and snack, and spread your calories throughout the day.