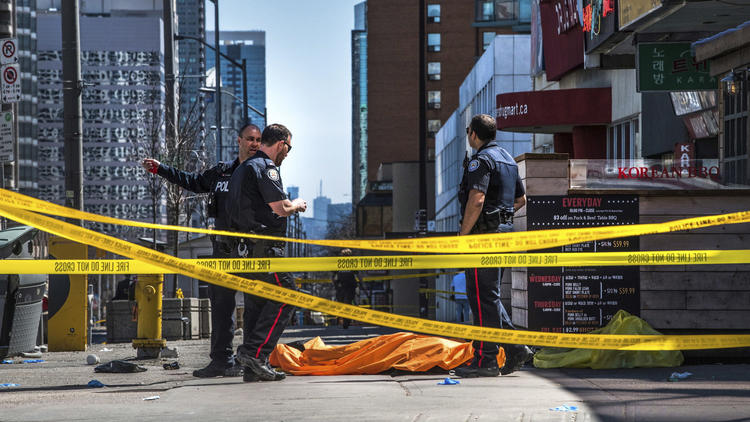 Share
A driver deliberately plowed his white Ryder rental van into a lunch-hour crowd in Toronto on Monday, killing 10 people and injuring 15 along a roughly mile-long (1.6-km) stretch of sidewalk thronged with pedestrians, police said.
Although the attack had the hallmarks of recent deadly vehicle assaults by Islamic State supporters in the United States and Europe, federal officials said it did not represent a larger threat to national security.

Toronto Police Chief Mark Saunders identified the suspect as Alek Minassian, 25, who he said had not previously been known to authorities. Police, who quickly arrested Minassian, do not know his motives.

“The actions definitely looked deliberate,” Saunders told a late-night news conference close to the site of the incident in the northern section of Canada’s biggest city, noting the van had been driven along sidewalks.

The brutal incident – which Prime Minister Justin Trudeau called a “tragic and senseless attack” – was one of the most violent in recent Canadian history.

Police in Canada’s biggest city are piecing together witness accounts and surveillance video trying to determine why a driver plowed a rented van along a crowded sidewalk, killing 10 people and injuring 15 in what many said seemed a deliberate attack.

A 25-year-old suspect was quickly captured in a tense but brief confrontation with officers a few blocks away from where his van jumped the sidewalk Monday and continued for a mile, leaving people bloodied and dead in his wake. But authorities so far had not disclosed a possible motive or cause even as the police chief agreed with witnesses that it seemed intentional.

Saunders said the suspect, Alek Minassian, who lives in the Toronto suburb of Richmond Hill, had not been known to police previously. An online social media profile described him as a college student.

Officials would not comment on a possible motive except to play down a possible connection to terrorism, a thought that occurred to many following a series of attacks involving trucks and pedestrians in Europe and the presence in Toronto this week of Cabinet ministers from the G7 nations.

Asked if there was any evidence of a terrorist link, the chief said only, “Based on what we have there’s nothing that has it to compromise the national security at this time.”