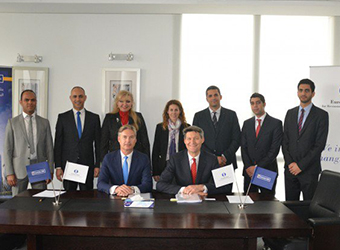 The EBRD’s loan aims to augment Emirates NBD Egypt’s capital base and support its growth strategy aimed at becoming a leading private sector bank in Egypt.

The subordinated loan qualifies as a tier 2 capital as per the recently modified regulations by the Central Bank of Egypt (CBE). It is the first time under new regulations that a third party lender provides such an instrument to an Egyptian bank.

Giel-Jan M. Van Der Tol, CEO and board member of Emirates NBD-Egypt, said that they are proud to be the first bank in Egypt to apply this innovative transaction structure to enhance their capital base. “This will allow us to further grow our business in Egypt, as well as continue to support the development of the real economy,” he added.

Philip ter Woort, the departing EBRD director for Egypt, said that allowing third party debt to this asset class could become an important additional tool for banks to manage their capital ratios and was developed in less than one year through strong cooperation between CBE, Emirates NBD, and EBRD. He added that through this loan, they are very pleased to support Emirates NBD-Egypt’s ambitious growth plans for Egypt, which can bring many benefits to the country, including the SME sector.

The EBRD has invested over €2.3 billion in Egypt through 43 projects since the start of its activities in the country at the end of 2012. The bank’s areas of investment include the financial sector, agribusiness, manufacturing, and services, as well as infrastructure projects, such as power, municipal water, and wastewater services, and support to transport services.

Russian flights to resume to Egypt on February 23