The European Bank for Reconstruction and Development (EBRD) raised its forecast for Egypt’s GDP growth during the current financial year 2021/2022, ending in June – to 5.7 percent from the 4.9 percent projected in November.

According to the EBRD’s Regional Economic Prospects Report released on Tuesday, Egypt’s economy will see a slowdown to 5 percent in the financial year 2022/2023 – which starts in July.

The report was released on the sidelines of the EBRD’s 31st annual meeting and business forum, which kicked off in Marrakesh with a special focus on the impacts of the Russian-Ukrainian War on the bank’s countries of operations.

On a calendar year basis, EBRD’s report expects Egypt’s GDP growth forecast to slow down to 3.1 percent in 2022 from 7.2 percent in 2021. This is will be followed by stepping up to 6 percent in 2023 as Egypt will be one of the top countries in the Southern and Mediterranean region in terms of output growth projections.

This upgrade comes despite the impacts of the war in Ukraine that have resulted in an increase in the prices of wheat, food products, and petroleum, EBRD said.

It added that Egypt witnessed economic recovery in the first half of the financial year 2021/22 – from July until December 2021 as its real GDP growth averaged 9 percent fuelled by improvements in tourism, manufacturing, construction, wholesale and retail trade, and agriculture sectors. This recovery will continue through the coming financial year, the bank stated. 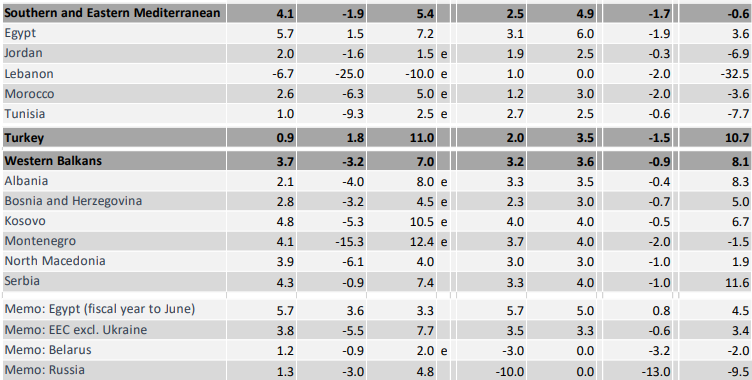 However, the EBRD report said Egypt is a net oil importer and one of the world’s largest wheat importers, and it relies on imports for other food commodities as well, all of which are expected to be subjected to price hikes over both short and medium terms.

“On the upside, higher demand and prices for Egypt’s gas exports could sustain growth in the medium term, and the International Monetary Fund (IMF)-supported programme could support reform implementation and investor confidence. The latter could also help manage external imbalances, as might the recent EGP devaluation,” the report read.

For the downside risks to Egypt’s economic performance, the report said that they include volatility in global energy and food prices and the possibility of a global economic slowdown across key sectors and supply chains.

The report also confirmed that Egypt remains the country with the most EBRD operations in the Mediterranean for third year in a row.