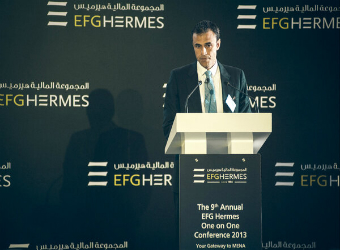 “We have a number of IPOs that we are currently pitching and others that we have been mandated,” Awad said in an interview in Dubai yesterday. The IPO of Cairo-based Arabian Cement Co. is set to close in the second quarter, according to Ahmed El Guindy, head of investment banking at EFG-Hermes, which was hired as joint lead manager for the offering in 2013.

The IPO would be the first in Egypt since the 2011 uprising that ended Hosni Mubarak’s three-decade autocratic rule. The revolt was followed by political turmoil that prompted the army to remove Mubarak’s successor, Islamist President Mohamed Morsi, from power in July. Egypt’s benchmark EGX 30 Index has rallied more than 60 percent since the military’s intervention, making it one of the world’s best performers in 2014.

EFG-Hermes is focusing on mergers and acquisitions as well as private placements in Saudi Arabia and the United Arab Emirates. The investment bank is also “closing” a private placement for a food and beverage company in Abu Dhabi, the capital of the U.A.E., he said.

“The entire investment bank is going to turn a corner in 2014,” according to Awad.

Awad said EFG-Hermes is also set to meet its plan to cut operating expenses to 500 million Egyptian pounds ($71.8 million) this year. The target was announced after a merger with Qatar’s QInvest LLC collapsed in May. EFG-Hermes at the time estimated 2013 expenses at 780 million pounds.

EFG-Hermes reduced jobs and sold some assets to meet the target. While the company is “not really in a strong hiring mode,” Awad said he sees no need to cut more jobs.

The shares climbed on Tuesday 4.4 percent to 12.85 Egyptian pounds as of 1:29 p.m. in Cairo trading, bringing this year’s gain to 48 percent. That’s more than double the 20 percent advance in the benchmark EGX 30 index.