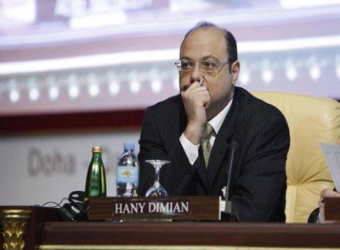 Egypt’s finance minister, Hany Qadry Dimian, has called for Africa to be represented in the Group of 20 in Washington DC, the Ministry of Finance said in a press statement on Thursday.

Established in 1999, the G20 has assumed an increasingly active role on global economic issues since the global economic crisis of 2008. South Africa is its only African member.

Speaking at a meeting of the Committee of Ten countries on the sidelines of the IMF-World Bank spring meetings on Thursday, the minister also called for an additional seat for Africa on the IMF’s Board of Governors.

Its founding objectives include advocating enhanced African participation in the governance of international financial institutions and developing a clear strategy for Africa’s engagement with the G20.

C10 discussions revealed that global financial issues and weakening emerging market demand led the average growth rate for African economies to shrink from 6.8 percent in 2012 to 3.7 percent in 2013.

The African Development Bank Group estimates that growth rates will rise to 4.8 percent during the current year and reach 5.8 percent in 2015 due to the expected growth in demand and increased foreign investment on the continent.

Governments present agreed on the importance of adopting cautious policies to stimulate economic and financial growth in Africa.

The minister is also expected to meet with the Group of 24, currently chaired by Egypt, as well as high-ranking official from the World Bank during his trip.

This year’s spring meetings, which began last Monday, are due to conclude on Sunday.

Egypt Plans Economic Restructuring Ahead of May Elections