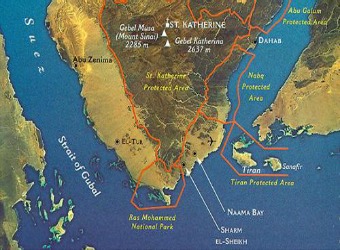 Egypt’s Cabinet has denied media reports that it had destroyed documents and maps demonstrating Egypt’s ownership of the Red sea islands of Tiran and Sanafir.

In a statement on Sunday, the cabinet said that it implemented a plan, devised in cooperation with the Ministry of Antiquities, to revise and exclude outdated and inaccurate maps that are used at Egypt’s archaeological sites.

“The project did not include destroying any maps that prove Egypt’s sovereignty over the two islands,” the statement read.

The cabinet called on media outlets to be “cautious and accurate when reporting news that could negatively affect the state and cause public disorder”.

In April, the Egyptian government agreed to transfer both islands under Saudi Arabian control, arguing that they had always belonged to the oil-rich Arab country and Egypt had merely been administering them on behalf of the Saudis since the 1950s.

The agreement was part of a wider maritime border demarcation agreement signed during Saudi King Salman’s historic visit to Egypt in April.

The decision to transfer the two strategic islands, which are located at the southern tip of the Gulf of Aqaba, to Saudi Arabia sparked widespread public outcry in Egypt, with many public figures arguing the islands were rightfully Egyptian territory.

Dozens of people were arrested and put on trial for protesting the deal, with many later released after paying hefty fines.

In May, the Saudi Cabinet approved the agreement during a session headed King Salman bin Abdulaziz Al-Saud.

On 5 December, the Commissioner’s Authority of the High Administrative Court recommended that the court reject the government appeal.

Apple to appeal EU tax ruling this week, says it was a ‘convenient target’