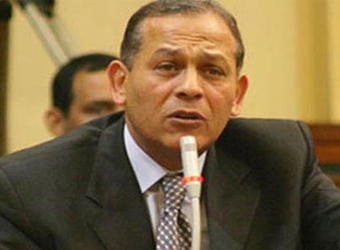 Sources indicated Saturday that Anwar El-Sadat, independent MP and head of the liberal Reform and Development Party, is expected to be questioned by Egypt parliament’s ethics committee on Sunday.

The sources claim that Sadat faces two accusations; the leaking of copies of a government-drafted NGOs law to a number of foreign embassies in Cairo without receiving parliament’s prior approval, and faking the signatures of some of his MP colleagues.

Sources indicated that the referral of Sadat to the ethics committee came after parliament’s internal bureau- composed of the speaker and his two deputies- investigated him last November.

“At the end of the investigation, the bureau decided that Sadat would be referred to the ethics committee to decide whether disciplinary measures should be invoked against him,” said a source.

The investigation of Sadat was based on a memo that was submitted by Social Solidarity Minister Ghada Wali to parliament speaker Ali Abdel-Aal last November.

Wali asserted that some foreign EU ambassadors in Cairo had told her that they were able to obtain copies of the government-drafted NGOs law from MP Sadat.

They believe that this law is highly restrictive and does not serve the business of NGOs in Egypt.

Wali sent a complaint to parliament speaker Ali Abdel-Aal, requesting that Sadat be investigated for leaking a national security matter.

Some MPs also submitted a complaint against Sadat, alleging that he faked their signatures in support of a law he had drafted last year.

Sadat has repeatedly denied the accusations, insisting that draft government laws are not a national security matter.

Sadat opened fire on the parliament speaker last week, accusing him of squandering as much as 18 million Egyptian pounds on buying three armoured cars.

Sadat said: “while Egypt is facing a severe economic crisis and while the president of the country-Abdel-Fattah El-Sisi- is calling for austerity measures all the time, we see that parliament’s 2015-2016 budget allocated 18 million pounds to buying armoured cars to be used by the speaker and his two deputies.”

In response, Abdel-Aal told MPs in a plenary session last Thursday that he would not hesitate in taking all the necessary legal measures against those who want to tarnish the image of the House of Representatives.

“The leaking of a parliament budget document to the media represents a national security crime in accordance with the constitution,” Abdel-Aal added.

Abdel-Aal stated: “I will never accept receiving illegal money in any way.”

Minister of Parliamentary Affairs Magdi Al-Agati told MPs that ahead of the parliament being elected in January 2016.

He asked the Ministry of Planning to approve buying an armoured car for the speaker of the upcoming parliament for security considerations.

Alaa Abed, head of parliament’s human rights committee, told MPs that he is surprised that in a time of high security and terrorist threats, Sadat rejects that an armoured car be allocated to the second man in this country or parliament speaker.

“Some media figures who pursue foreign agendas are doing their best to recruit some MPs who also share these agendas to disrupt parliament and the country as a whole,” he said.

“I want to tell this group that my patience has become thin and that I will lift the veil on this clan who is ready to spend a lot of hot money for disrupting this democratically elected parliament,” said Abdel-Aal.

Head of parliament’s budget committee Hussein Eissa said that the committee would issue a detailed statement on the cost of the three armoured cars and how and why they were bought.