Egypt presidency congratulates Trump on his inauguration as US president 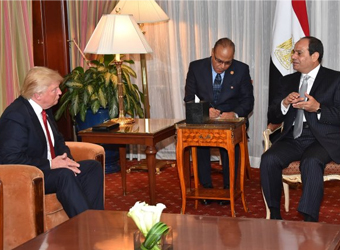 The Egyptian presidency released a statement on Friday, the day of the inauguration of new US president Donald Trump, extending congratulations to the American people and wishing them prosperity and stability, Al-Ahram Arabic news website reported.

Egypt’s president Abdel-Fattah El-Sisi congratulated the American president, wishing him luck in performing his duties and responsibilities and in meeting the aspirations of his people.

El-Sisi said he looks forwardto consolidating the bonds of friendship and promoting the strategic relationship between Egypt and the US on all levels.

The presidency’s statement also said that Egypt is looking forward to a revitalising of Egyptian-American relations during Trump’s time in office that would benefit both peoples, with a focus on cooperation in tackling various regional issues in the Middle East.

The Republican Trump was sworn in at the White House in Washington DC on Friday to become the 45th president of United States, succeeding Democrat Barack Obama, who served for two four-year terms.

Following the conclusion of the US presidential elections in November, President El-Sisi invited Trump to visit Cairo during a telephone call where El-Sisi congratulated Trump on winning the elections.

Parliament has not yet sent NGO law to president: Minister