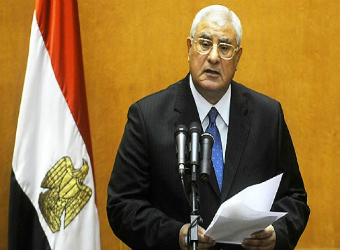 Egypt’s president will announce that presidential elections will be held in March, in a statement expected to come hours after the final results of a constitutional referendum are made public on Saturday, a newspaper reported.

Al Tahrir newspaper quoted Essam Eddine Abdel Aziz, first deputy to the head of the State Council, as saying that President Adly Mansour will call on Egyptians to take part in presidential elections.

Abdel Aziz is also a member of the presidential and parliamentary election committee, which he said will start meeting on Sunday.

In December, a draft constitution was amended to allow a presidential election to be held before parliamentary polls, indicating a potential change in a political transition plan announced by the army after it toppled Egypt’s first freely-elected president in July.

A presidential source told Reuters that the president had yet to decide which elections will come first.

A major milestone in Egypt’s political transition, the constitution must be approved in a referendum held last week.

It is expected to pass with overwhelming support from Egyptians who staged mass protests against Morsi’s rule before his ouster.

The new constitution could lead to an outright ban on Islamist parties and strengthen the political grip of the already powerful military establishment that has put itself squarely back at the heart of power since toppling Morsi.

Seeing Sisi as front-runner for president, some assembly members wanted the presidential ballot held before legislative polls or even at the same time, so that a strong presidential candidate could forge an electoral alliance for the parliamentary race.

Sisi led the July 3 overthrow of Morsi and is widely seen as the lead candidate for the presidency. He is expected to announce his candidacy within a few days.

While Brotherhood sympathizers hold him responsible for the deaths of hundreds of Morsi supporters killed in a crackdown on the movement, other Egyptians see him as the kind of strong man needed to restore stability after three years of turmoil.

The constitution will replace one signed into law by Morsi last year after it was passed in a referendum. The new text strips out Islamist-inspired additions introduced by the Islamist-dominated assembly that drafted it.