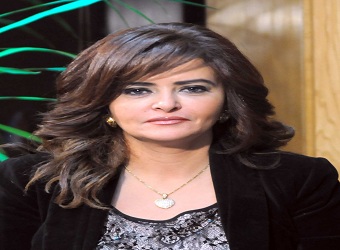 The Egyptian Media Syndicate has announced its full support to the Egyptian journalist and TV presenter Dina Abdel Fattah’s latest decision to quit from Al Tahrir TV channel. Abdel Fattah has decided not to resume her talk show due to conflicting views over the TV channel management in regard to the editorial and administrative policies.

El-Shazly added that the TV channel had considered such a prompt decision a few hours before the talk show aired; the “Al Shaab Yourid” (People Want) team felt surprised for the episode was ready and the hosts were due to show up with Abdel Fattah.

The Egyptian Media Syndicate Chairman further noted that the real reason behind halting Abdel Fattah’s talk show was the TV presenter’s daring opposing views giving a serious cause for concern among multiple entities in the country.

Her recent controversial statement was made during the Independence Current’s conference held on Wednesday February 20 at the headquarters of the Young Men’s Muslim Association’s, El-Shazly added.

Abdel Fattah has asserted during the conference that the current regime is exercising repressive control over the media figures who work on unveiling the truth. She added that securities authorities alongside some official figures interfere in the talk show’s topics, hosts and scripts as well.

El-Shazly explained that securities authorities may have sent orders to Al-Tahrir’s management so as to stop Abdel Fattah’s show. Such an action the syndicate flatly rejects and would give a highly negative indication of the country’s freedom of speech, a preliminary to witnessing a police state.

The Egyptian Media Syndicate Chairman has warned against the satellite channels’ potential blacklist so as not to host particular figures whether they are pro or against the ruling regime. Such a potential blacklist violates the professional standards of the media industry, he noted. Al-Tahrir would then be put on the top violating channels amid its recent action against Abdel Fattah.

“Al-Tahrir since its inception till the moment I speak has become the grave of all the media figures of great moral integrity who would not accept to falsify or fabricate the truth.” El-Shazliy said

Moreover, El-Shazliy pointed out that Al-Tahrir channel’s policy has drastically changed which was originally born after the outbreak of January 25 revolution to represent the Arab Spring’s noble objectives. However, the channel currently stands for another mission seeking to please the current regime.

Al-Tahrir Channel is now standing at important crossroads whether it would stick to the media professional standards which aim to liberate minds or it would become marginalized losing its credibility once the audiences realize the hidden fact that the channel is serving its owner (investor or businessman)’s interests, El-Shazliy concluded.