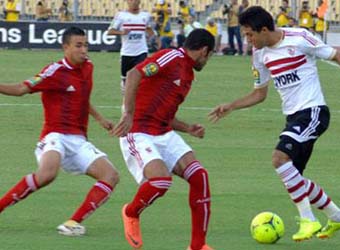 Egyptian giants Ahly and Zamalek will be facing difficult tests when they take on Cameroon’s Coton Sport and Libya’s Ahli Tripoli respectively on Tuesday in their second games of the African Champions League group stage.

Ahly had a poor start of their group-stage campaign after being held to a goalless draw against Zambian side Zanaco at home last Saturday.

Beating Coton Sport now is a must for the Egyptian league leaders to realise their hopes of a smooth passage to the quarterfinals. But the hosts will not be an easy opponent especially as they look to recover from their opening 2-0 loss against Wydad Casablanca. The Moroccans are now top of Group D.

However Ahly coach Hossam El-Badry seemed quite confident despite that slip.

“Ahly lost an important two points at the start of their group-stage campaign, but the road is still long,” Badry said in a press conference following the draw with Zanaco.

“I can guarantee you we will qualify for the quarterfinals,” he added.

Ahly’s chances are boosted by a perfect record against the Cameroonian giants since they beat them twice in the Champions league (2008, 2013) and once in the Confederation Cup (2014).

The eight-time African Champions will face the Cameroonian side without some key players like Walid Soliman, Ahmed Hamoudi and Ahmed Hegazy due to injuries.

“Absentees won’t affect us as we are fully focused and determined to win in Cameroon. Our players are experienced enough to secure a positive result despite the weather conditions there,” said assistant coach Ahmed Ayoub.

Zamalek are flying to Tunisia to play Ahli Tripoli aiming to continue their recent revival under coach Augusto Inacio.

The Whites won their opening game 2-0 against Zimbabwe’s Caps United last Friday but the Portuguese tactician was not satisfied.

“Wasting many goal scoring opportunities could push me to visit the hospital soon. It is very dangerous and could lead the team to lose in the coming matches,” he said after the match.

The Whites cannot afford these mistakes against an opponent who will fight to win after a heavy 3-0 defeat to Algeria’s USM Alger; current leaders of Group B.

“Zamalek now are on the right track to achieve the objective that I am working towards,” Inacio said.

“I studied Ahli Tripoli well and I have full confidence in my players to win,” added the 62-year-old coach who took charge at Zamalek in April for a year-and-a-half.

Against Ahli Tripoli, Zamalek will be missing key playmaker Ayman Hefni due to groin injury.

Winning their first Champions League title since 2002 could be the best hope for Zamalek fans after all but losing the current domestic league title race to arch rivals Ahly.