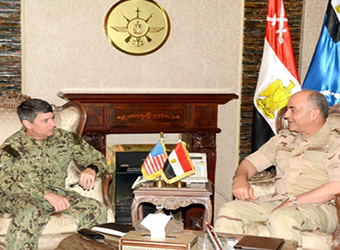 Egypt’s Army Chief of Staff Mahmoud Hegazy met Wednesday with the commander of the US Fifth Fleet Vice Admiral Kevin Donegan and a US military delegation in Cairo, the Egyptian armed forces announced in a statement.

The meeting – which was attended by several Egyptian military commanders – saw a discussion of the latest developments in the Middle East as well as military cooperation between Egypt and the United states.

Also on Wednesday, Hegazy met the US Assistant Secretary of State for Near Eastern Affairs Stuart Jones, where they discussed regional developments, particularly in Libya.

The meeting was attended by a number of US military officials as well as the US ambassador to Libya.

Hegazy also met on Wednesday with UK Defence Senior Advisor Middle East Tom Beckett and a number of British officials, where they discussed military cooperation between the UK and Egypt.

Beckett expressed his country’s support of Egypt in its war against terrorism and its important role in supporting peace in the Middle East.

‘Our strategic goal is to preserve the Egyptian state”: Sisi tells youth