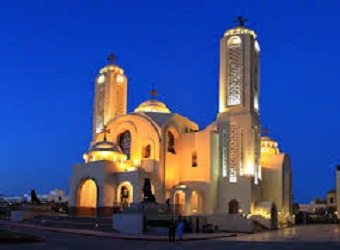 Egypt’s Coptic Orthodox Church announced that its Christmas mass on 7 January 2018 will be held for the first time at the newly built cathedral in the new administrative capital, MENA news agency reported.

In January 2017, President Abdel-Fattah El-Sisi announced that the country’s largest mosque and church would be built at the new capital as a symbol of coexistence, following the terrorist attack that killed at least 27 people in December 2016 at St. Peter and St. Paul’s Church in central Cairo.

Egypt’s interior ministry announced on Tuesday that police will be on high-security alert during Christmas celebrations, which start next week, with 230,000 security personnel to secure 2,626 churches nationwide.

Egyptian churches have been targeted repeatedly by Islamist terrorists in recent years.

The country’s new administrative capital is set to be completed in 2020.

Located some 40 km to the east of Cairo, the under-construction city is part of the government’s plan to expand urban areas to deal with the country’s rapid population growth and improve the nation’s infrastructure.

The government has started building 25,000 residential units in the city so far.

Here is the most the most important information about the Cathedral Church in the New Administrative Capital:

1. It is called the “Cathedral of the birth of Christ.”
2. The Cathedral Church is the largest church in the Middle East.
3. It is located east of the exhibition project EXPO, south of the central park in the new capital.
4. It is implemented on 15 acres, which equals 63,000 square meters.
5. The Cathedral Church is built on 7,500 square meters.
6. The Cathedral Church has the capacity to hold some 9,000 citizens.
7. The Cathedral Church contains a main square and papal headquarters, a reception hall, a meeting room and administrative offices are currently under construction.
8. Orascom Company is responsible for the implementation of the Church under the supervision of the engineering body Egyptian Armed Forces.
9. The construction of the administrative capital church began last January.
10. The Cathedral Church contains a two-story underground garage and a service building.
11. There are two lighthouses designed for the cathedral building.
12.The lighthouse was designed according to Coptic architecture and contains several bells at the top of the lighthouse.
13. The general consultants of the project are ACE and SSA.
14. About 30 percent of the church area was built without a basement.

The New Capital, which is currently being developed by the New Administrative Capital for Urban Development, will include residential districts, educational institutions, hospitals, 40,000 hotel rooms, a theme park, solar plants and a new international airport.

Apple Watch shipments said to more than double by 2021