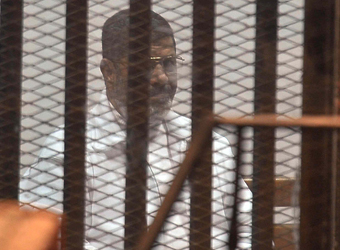 The court also confirmed death sentences against three convicted in the same case.

A total of six defendants received death sentences in the Qatar espionage case, but only three could appeal as the rest are still at large.

The Court of Cassation’s verdict is final and cannot be appealed.

Morsi received the original sentence in June 2016 after being found guilty of using his post to leak classified documents to Qatar with the help of secretaries and Muslim Brotherhood figures.

Morsi and the head of his office, Ahmed Abdel-Ati, also faced charges of leaking secret information on general and military intelligence, the armed forces, its armaments and other state secrets.

Since his ouster and arrest in 2013, Morsi has been facing a number of trials on charges that include conspiring with foreign powers- including Hamas, Lebanon’s Hezbullah and Iran’s Revolutionary Guards — to destabilise Egypt, and insulting the judiciary.