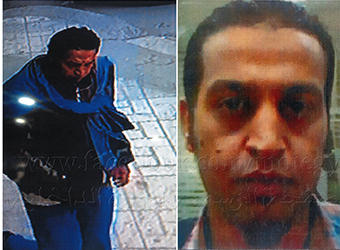 The ministry said that Abdullah was born in Upper Egypt’s Qena, worked at an oil company and resided in Suez governorate.

The ministry added that efforts are underway to identify another suicide bomber responsible for the deadly blast at Tanta’s Mar Girgis Cathedral on Sunday morning.

The ministry said that Abdallah was an associate of Amr Saad Abbas Ibrahim, a fugitive who is the leader of a terrorist cell that orchestrated last December’s deadly suicide bombing of Cairo’s St Peter and St Paul’s Church, which killed 29 worshipers, mostly women and children.

The statement added that police killed seven members of the cell in Upper Egypt’s Assiut governorate in a shootout during a security raid on Monday.

The ministry also published the names of 19 wanted members of the cell.

At least 46 people were killed and dozens injured on Sunday morning, when two blasts ripped through the two churches in Tanta and Alexandria, in the deadliest attack on Copts in the country’s recent memory.