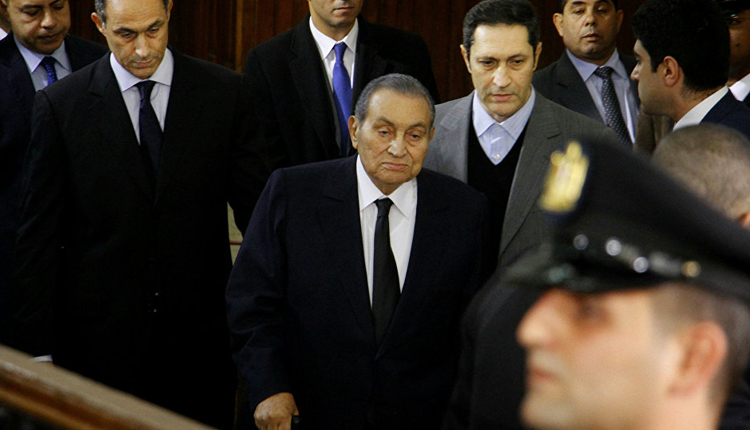 Former Egyptian president Hosni Mubarak testified on Wednesday in the re-trial of ousted president Mohamed Morsi and others in the case known in the media as the “jailbreak trial.”

The case dates back to violent incidents surrounding a jail breakout after 28 January 2011.

In November 2016, the Court of Cassation revoked death sentences and ordered retrials for Morsi and other defendants.

Mubarak, who was ousted during the January 2011 uprising, arrived to the court accompanied by his sons Gamal and Alaa.

After swearing the oath, Mubarak asked to be granted permission from the president and the commandership of the Egyptian Armed Forces before revealing to the court information related to the tunnels between Gaza and Egypt, so as not to be violating the law.

The prosecution has charged that supporters of the now-banned Muslim Brotherhood and the Palestinian Hamas movement infiltrated the Egypt-Gaza border through tunnels after the outbreak of the January revolution to storm jails and free imprisoned Brotherhood members.

However, the head judge in the trial Mohamed Sherine told Mubarak that the court is seeking information not related to national security issues, and instructed Mubarak to answer questions.

Mubarak told the court that the tunnels between Gaza and Egypt had existed long before the 25 January revolution and that they were mostly used to transfer food commodities and other goods.

When asked by the judge whether the tunnels were used during the early days of 25 January revolution, Mubarak declined to answer without permission from the president and the commandership of the Armed Forces to speak on the matter.

Nevertheless, he stated that former head of the general intelligence service Omar Suleiman informed him on 29 January that about 800 militants had infiltrated the eastern border through the tunnels, but he did not inform him about the nationality of those militants or the reasons for their entry.

The 90-year-old former president added that militants killed policemen and protesters in Tahrir Square, creating chaos in the country, and that they broke out Muslim Brotherhood members from jails.

Mubarak said he did not hear about a US-Brotherhood plot to foment chaos in the country, adding that he does not want to delve into details, and that security and the intelligence services have all relelevant information.

He added that he believes there are lots of plots but could not address them without a permission from the presidency.

When asked about the role of the Muslim Brotherhood in the events of the 25 January, Mubarak repeated that he needed the permission from the president and the commandership of Egyptian Armed Forces to speak on the matter.

Mubarak said during his testimony that before 25 January the Egyptian general intelligence service was following the meetings of the members of the international Muslim Brotherhood organization and coordination between them.

Mubarak told the court that he handed over the country to the  Egyptian armed forces so “Egypt won’t fall”.